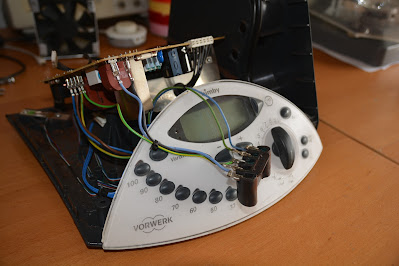 At the beginning, when in my house we decided to purchase this kitchen food processor/blender almost 10 years ago, I considered it to be somewhat of an overpriced consumer asset in spite of the multiple features that it enclosed. Still I went with the hype and gave some credit to how much it could make life easier, in particular when it came to cooking meals and otherwise more complicated recipes.

But it was not before some experience with the device and the first caveats, that I could understand how much of a product fraud this device proved to be.

First, if one is to shell out around 1000 € for a blender, there are certain expectations that build up. Not that it would need to be gold plated or something, but the first experience was that it would be not much different from most kitchen appliances in respect to the plastic materials used, and the engineering and hardware required to fulfill its functions.

One aspect that early in the product live suggested a red flag, was the transparent measuring cup/cover: it started to crack, apparently due to the temperature stresses. 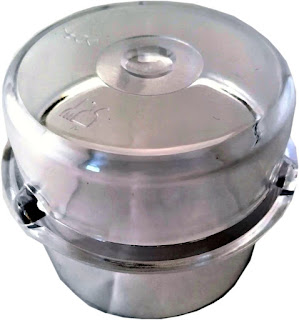 As the machine was still within its warranty period, we got a replacement for another cup. Both cups were identical (original and replacement) and had the >PC< plastic marking, which meant these were just made of polycarbonate plastic. These could be different grades though, and the later be more resistant that the original cup. However after some time (already after the warranty period), the new cup started showing the same effects.

The ultimate problem though, happened much later: in the past couple of months, the blender ceased to spin, issuing a "Er. 34" error on its display (it would briefly try to spin the motor, producing tone-like noises while doing so).

Upon opening the case and removing the motor, I could immediately tell that it was in pretty bad shape: 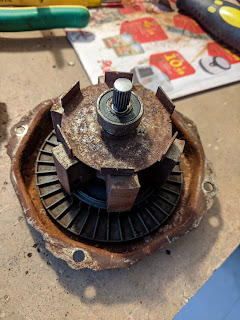 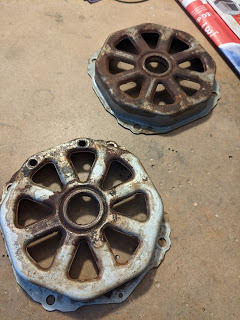 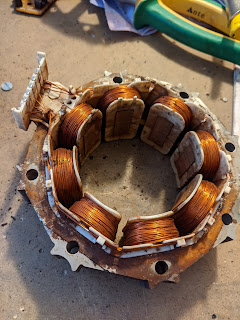 Even though it became this way much later than the 2 years warranty period, still we are talking about a 1000 € blender: in the way it is designed, the device largely depends on the endurance of the seals that exist in the bottom of the mixing bowl.

If these develop leaks, even though there are multiple channels to convey the flow of fluids to outside of the device, it is nearly unavoidable that some of it will eventually build up into the motor itself, and accumulate at the base of the motor, where these meet the bottom bearing of the later. 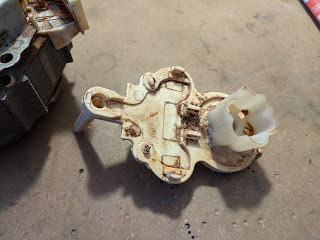 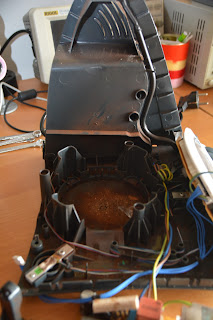 With continued exposure to the liquids and contaminants from the food, the motor parts will become damaged.

While the motor is of switched reluctance type, and as such (fortunately) it is difficult for electricity to come into contact with the fluids that eventually will ingress into the motor, still it is very susceptible to damage, as it is a cumulative process.

And from what I can tell this will happen very quickly once it sets in, because a year earlier I had to open the unit to repair another problem: a contact issue with the temperature selection buttons, and back then the motor was fine, and compared to the photos above, the motor was in much better condition. The photo below is from July 2019, and at present the motor is heavily rusted as is visible in the photos shown above. 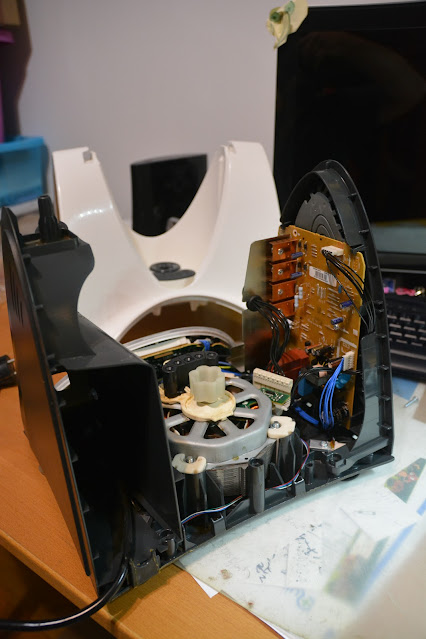 Even though with some treatment the rust could eventually be removed, the major problem is the bottom bearing which in this case is seized.

These bearings are strongly attached to the motor shaft, probably with a very powerful thread-lock or epoxy. 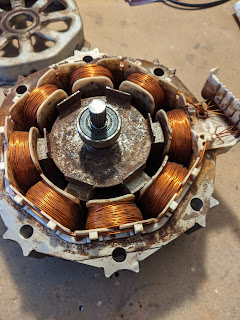 The outer part of the bearing could be separated from the motor casing after applying some heath from a hot air gun, but regarding the inner part (which is in contact the motor shaft) I have gave up attempting to remove after several tries.

After seeing a video from another user, I realized that a more "serious" approach is required to remove this bearing:

Currently I am pending between attempting to replace the bearings by removing the existing ones through some destructive process, or replace the motor altogether.

Again this is another aspect that suggests some level of deliberation regarding maintenance of this product: making it difficult to replace an otherwise simple part is probably in Vorwerk's best interest. A brand new motor will cost about 200€, which is a significant amount, considering the kitchen appliances (or respective parts) that could be purchased for this value: a modern washing machine for example will need to have a comparatively robust and sophisticated motor, and such part will normally cost a fraction of the price.

Besides the bearings (or motor), in the case there is the chance that more parts will need to be replaced: the root cause for the motor contamination is probably in the blade assembly and the bearing and seals that compose that part. Without it being replaced, probably the problem will occur again.

There is also the vague possibility that on the electronics side there can be damage as well. This is not such a likely scenario because Vorwerk seems to have given considerable thought to the motor control side, by implementing protections that likely prevent the IGBTs (the power transistors that drive the motor) from frying with much ease: 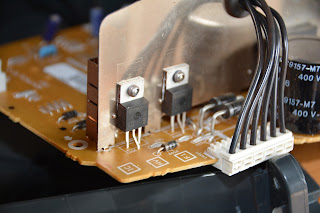 For those playing along at home, the particular type of IGBT used in the Thermomix TM31 is a SP04N60, and there are 6 of those in it. These are 600 Volt rated, and can deal with a maximum of 9.4 Amps in continued operation: 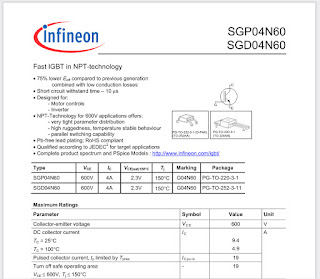 While a thorough reverse engineering of the board was not done, it is quite obvious that these IGBTs are being used in an H-Bridge configuration where each pair of IGBTs provides the push-pull configuration required to drive each of the 3 coil groups of the motor. There can be more complex configurations, but this is the simplest and eventually the cheapest, as it is the minimum size (transistor wise) H-Bridge possible to drive a switched reluctance motor.

I haven't yet tested the IGBTs as this would require each to be removed from the PCB, which is a laborious task, and it might only make sense to do so after the motor is fixed and an error or failure condition would still be present.

Another component that may require attention (although irrelevant in the case of a motor replacement), is the motor shaft sensor/encoder: 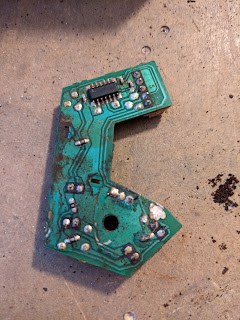 This board essentially implements a quadrature encoder (I've implemented one for a robot car I've built long ago - you can find more details here - https://www.creationfactory.co/2010/12/quadrature-encoder.html).

It has a couple of optical sensors separated such that a phase difference of 90 degrees in the signal from each sensor is obtained. This allows for direction and speed to be measured. A metal plate with multiple fins mounted in the top of the rotor functions as a spinning obstacle for the sensors, allowing the speed measurement to be obtained. 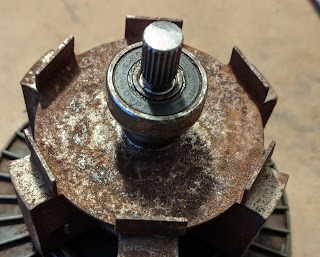 This quadrature encoder is essential for the operation of the motor, because it is the only source of feedback for the microcontroller. This allows the timing of the H-bridge switching to be correct against the current speed and position of the rotor. As with other types of brushless motors, while in theory it is possible to derive or estimate the position based on different methods that don't require a sensor, these tend to be challenging to implement and require complex signal processing and filtering in order to provide reliable results. That is because in that case the current flow in each phase must be measured and processed, or in other cases the back EMF of the unpowered phase sensed (not applicable in the case of the reluctance motor, at there is no magnetic rotor to influence it).

The only semiconductor present in the board is a quad schmitt trigger gate chip, and is responsible for performing some signal conditioning before the output is sent to the microcontroller: 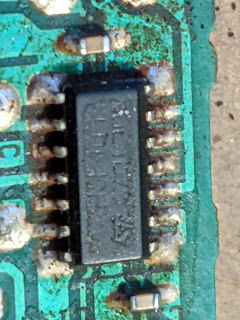 This is rather simple electronics that shouldn't easily fail, in spite of the relatively harsh conditions in which this particular board is located. One aspect that caught my attention is the fact that the manufacturer didn't bother adding any conformal coating to this board. On the other hand, the main board where the power supply and control circuitry is located was properly covered with conformal coating in the back of the PCB. For example a view of the fully coated micro-controller present in this board: 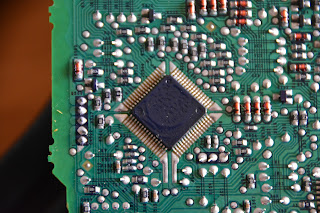 I was able to read the writings in the package, and found:

Searching online, nothing can be found. Likely it is a standard NEC micro-controller that Vorwerk chose to have the package labels customized.

Still need to decide on what repair action to attempt. I have some reluctance (pun intended) in replacing the entire motor, even though this one is not in great condition overall..

Do you know what brand/type of conformal coating is that? I replaced a shorted igbt but now it has no protection and thus could be fried very soon. I'd like to use the same product not just a random coating

Do you know what brand/type of coating is that? I replaced a bad igbt but now it has no protection and thus could be fried very soon... i would like to be a pro and use the same conformal coating not just a random one

I am not exactly sure what kind of conformal coating they have used, but judging by the fact that has a somewhat rigid consistency and is this is a device that will be exposed to somewhat harsh conditions, it may be based on epoxy. If a silicon one was used, I would expect a more soft consistency, but again, I am not an expert in that field. I would say you can be on the safe side coating the area you repaired with epoxy, as it will protect the IGBT pins from moisture.

Thank you very much for your kind rely and your nice blog post, keep up the good work!