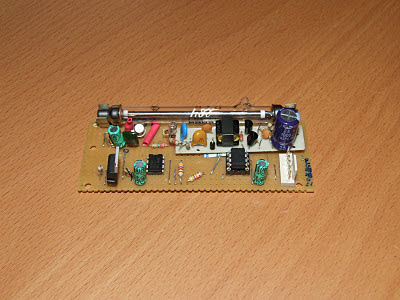 With nuke plants operating under questionable technical safety, natural events threatening humans and their dangerous energy production artifacts, and other humans disseminating fear through nuclear sovereignty upon the rest of the world, we came a long way from the happy ignorance of distant decades.


As such, in an attempt to further increase the sense of paranoia we readily accept to live in, I took some time to design and build another sensor, in this case a low level radiation detector. Having modularity in mind, I though of creating the device in such way to serve its purpose in more than one context. In order to keep it modular, I have put all the components necessary for it to operate in a stand-alone fashion, and communicate through a standard bus with other modules. Given its adequation to the solution, I have selected the I2C bus. The necessary elements for autonomous operation would have to be:


The big thing about this modular design is that I can either use the sensor in my other project, the AMIRO robot (link), or attach it to a still-to-be-implemented UI module, made up by a display, speaker, and microcontroller to receive the data, convert event counts to microsieverts (radiation dose unit), and possibly log the data and make it available via USB. Pretty good! The only issue, having time to materialize the ideas. In this case I can at least say almost half the implementation effort is done, 100 % of the hardware design is done, 30 % of the firmware (which accounts for the full ATTiny85 routines), and a few drafts of the mechanical layout are done in my sketchbook. One step at a time, as after all this is a hobby to be kept as a pleasing activity, out of the race track. And of course the longer the ignorance about the radiation, the better the bliss :)

About the testing of this module, it has only been done in respect to the background radiation (that is the radiation that is all around us, coming from several sources such as the trace amounts of radon gas that is in the air, Potassium 40 from our bodies, from the soil, and of course from the outer space). An average of 6 or 7 counts per minute is obtained, which converting to microsieverts (using the tube datasheet) accounts for about 0.100 microsieverts per hour, which is consistent with the expected background radiation for our location and altitude.

Tests with other sources have not yet been carried out, given its scarcity (fortunately :) ). Yet to be tested are common things known to emmit slightly more radiation than background, such as Brazil nuts, granite, bananas, thorium gas mantles (a bit hard to find these days), americium smoke detectors (practically discontinued in the EU), etc. Some of these materials do not release quite many gamma photons, making radioactivity harder to detect. A pancake detector would in this case be far more efficient at detecting a broader range of charged particles.
at 3:02 PM

However, I wounder, if you really want to know the radiation arround your :)
Has you say, ignorance is bliss.
And what if you don't get any readings ?
Is that good ? i.e. no radiation, or is it a failure of the device ? :)

Thank you. In fact I haven't mentioned in the blog, but the device has already been tested against background radiation (that is the radiation that is all around us, coming from several sources such as the trace amounts of radon gas that is in the air, Potassium 40 from our bodies, from the soil, and of course from the outer space). I obtain an average of 6 or 7 counts per minute, which converting to microsieverts (using the tube datasheet) accounts for about 0.100 microsieverts per hour, which is consistent with the expected background radiation for our location and altitude.

Awesome project :). So how do you have the I2C bus working on this? Do you happen to have the schematic you use?