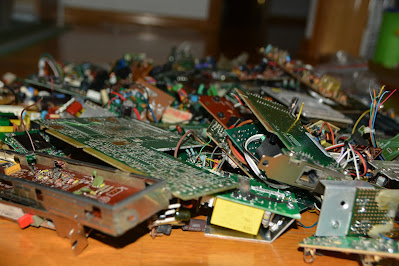 In these days where the exhausting of natural resources is an ever increasing concern, and the release of non-recyclable waste (which includes many electronic products) is a problem with no general solution in sight, being able to re-purpose devices that would otherwise be thrown to the garbage, can only be at all levels a welcomed idea. If we add to that the fact that in the current state of affairs, the semiconductor industry is experiencing a generalized production crisis, then re-purposing should have all the legitimacy it is entitled to have.

One thing that may come as a challenge in certain Electric Vehicles such as e-bikes and e-scooters, is the availability of the correct voltages for powering extra devices. In e-scooters in particular, the devices need to tolerate the single supply voltage that is normally available. Depending on how many cells the batteries have and how these are configured, 48 Volts and above are the typical voltages to expect. This poses a difficulty because it makes it impossible to use lamps and other loads that are commonly available and abundant at a low cost for motorcycles and cars. 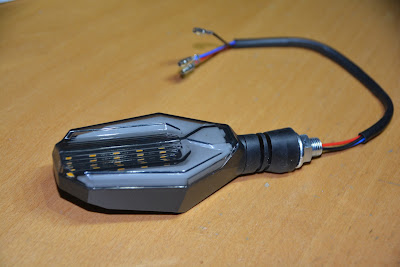 In these vehicles, 6 and 12 Volts are the common voltages. Trucks often use 24 Volts. Electric cars on the other hand, while having a high voltage electrical system (often at about 400 Volts or more), normally have a DC/DC converter for supporting the low voltage system which normally runs at 12 Volts. It is common for a 12 Volt lead-acid or Li-Ion to also be present in these vehicles for backup purposes. This battery is charged by the DC/DC converter and usually its role is to supply power to basic systems such as the door locks in the event that the main battery enters power cutoff for protection. Basic components such as light bulbs and some of the electronics are also powered by 12 Volts in the EV's, which makes it easier to source these in the market when necessary.

For example 60 Volts is already too high for common linear regulators such as the 7812 to accept (the latter maxes out at 35 Volts), and besides, at such a voltage differential (e.g. 60 to 12 Volts) the efficiency of a linear conversion is beyond lousy - 80% of the power is being wasted as heat than being delivered to the load.

As such, among the few decent solutions that we know, the common approach for dealing with conversions where the voltage difference is high, is to play with the time domain - if we are able to switch and modulate the input voltage, we can in theory convert that high voltage into a lower voltage using traditional devices such as the transformer. The latter, as long as operating below core saturation, can be a very efficient device (above 99% in some cases). 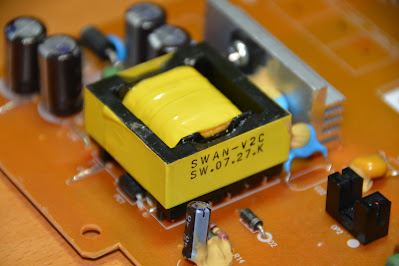 In such a device, the output voltage and load regulation can be kept stable by controlling the duration of the voltage switching on the input side (PWM modulation) as a function of the error amplitude at the output - in essence we have a closed loop controller. Because we are switching our input voltage instead of linearly dropping it, there is very little waste heat, because our switching transistor will be either on or at cutoff most of the time. With the exception of the brief periods when the transistor is switching and is crossing the linear region, and the small losses due to its internal resistance when on (normally in the scale of milliohms), and also capacitive losses in some cases, in general the losses here are usually very low. This makes the Switching Mode Power Supply (SMPS) a very efficient device when it comes to converting voltages.

Many DC/DC converters are in fact some form of Switching Mode Power Supply, with some simpler than others.

I found the need to have a DC/DC converter for powering additional loads, such as an extra set of 12 Volt blinkers for my E-Scooter. With that in mind, and added to the fact that I have the tendency to hoard electronic "junk" with the expectation of later reusing the parts, instead of ordering a 12 Volt DC/DC converter, spend the money, wait for the shipping, contribute to a worse future, I decided to exercise improvisation and try to figure out what junk from the bin could be adapted to serve the same function.

Knowing that many of those wall adapters that are used for powering a large range of electronic devices (smartphones, wifi routers, modems, laptop computers, etc) are usually SMPS's, and that I have a ton of those: 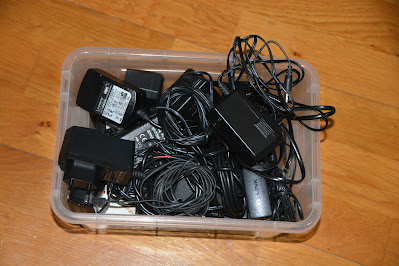 I decided to dissect one, and do some experimentation - normally these are rated to accept a broad range of voltages (normally anything between 100 and 240 Volts AC), but just maybe some could accept even lower voltages, like, e.g. 60 Volts... 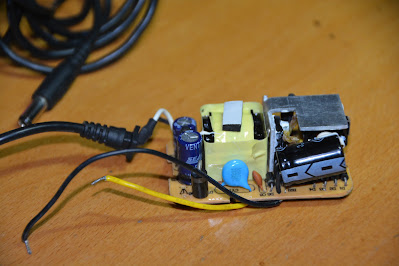 But instead of letting the DC voltage go via the mains input, where some losses due to the bridge rectifier would occur, I tested by injecting the DC voltage directly in the rail after the bridge rectifier - it can be easily located by finding the large mains bypass capacitor (should be the largest electrolytic capacitor on the primary side of the power supply - these are normally rated to 400 Volts). All it takes is to connect the DC input in parallel with this capacitor.

And, on the first power supply I have tested, success was immediate. I used a small wall adapter that belonged to a WiFi router and managed to get the voltage down to about 35 Volts before it would start putting a high pitch noise. At the output I could still measure the 12 Volts, but I could see that the input current besides substantially higher, would stay high even after bringing the input voltage back up (as if it would enter some kind of a loop). But for my application (the E-Scooter) this would hardly be an issue, because the minimum voltage that will ever be supplied is 50 Volts, at which point the BMS will cut the current in order to protect the battery. 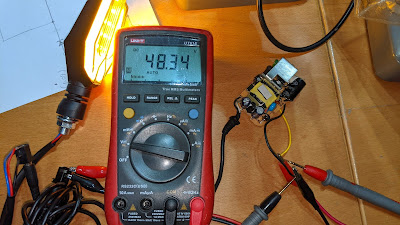 From a few measurements using the LED blinker (shown in the photo) as a load, and applying 60 Volts as the input voltage, I could verify that the calculated efficiency is of about 85% after comparing the input power vs the output power. I could speculate that this shouldn't fall far from the efficiency under normal operating conditions (i.e. fed with 240 Volts AC) - it may well be slightly lower due to the bridge rectifier, which we are bypassing in this case.
It is probably worth noting that as we force the SMPS to operate at a lower input voltage, it will need to increase the duty cycle on the switching transistor. This translates to a higher input current, which depending on the power supply components, could exceed what it was designed for. So it is a good idea to read the datasheet on the MOSFET that is used for switching, and eventually derate the the power supply, i.e. if normally it would supply 1.5 Amps with a 120 Volt input, then at 60 Volts DC, we may assume that 750mA is a safe maximum because the components should see approximately the same maximum current. It is a matter of analyzing a bit more carefully the SMPS at hand. It may also be the case that the primary side is very robust and comfortably above the specs, and the rated current limit (e.g. the 1.5 Amps) be more significantly constrained by the secondary side - which doesn't change regardless of the input voltage.

Being a very common type of scrap electronics, and as these often have some degree of quality in the DC regulation, it is therefore useful to know that at least with some SMPS this is a trick that can be exploited. It is not guaranteed that every SMPS can be fed with 60 Volts DC and work properly because some might have a higher minimum voltage threshold, but it is still worth trying, given the asymmetrical returns involved 😉