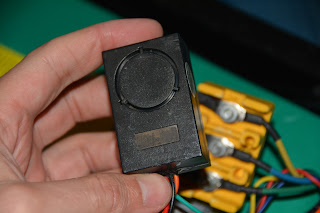 The Laotie Ti30 (and other similar chinese scooters) comes with a basic alarm device that is capable of locking the scooter via a remote control. These alarm boxes are usually dirt cheap and can be bought separately for 5 € on Aliexpress or similar seller. 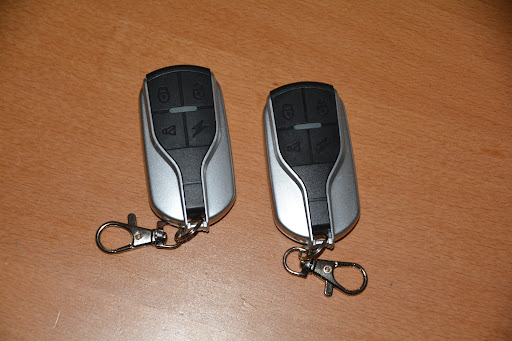 It also features some kind of vibration sensor (judging by the clinking sound when shaking the alarm box, it appears to be mechanical) so that it can trigger a siren when someone attempts to move the scooter. If movement persists, it will sound the siren permanently.  The device can both lock the scooter and also lock and keep the alarm enabled. For locking the scooter, the device simply sits in series with the low current power rail (which powers the lights, horn, LCD display and the ESC control electronics), cutting the power to everything except the blinkers (which for some reason are in a separate rail) when the user presses the locking button on the remote control.

This power rail has no overcurrent protection that I could identify (unless there is something in this alarm box - which I haven't yet opened up). This leaves it dependent on whatever might exist in the battery BMS. But because the BMS is expected to see large currents before it will trip any kind of protection (probably anything up to 100 Amps is fine for the BMS - peak motor current could reach values close to that), the thin wiring of this low current rail will probably melt and burn under a short circuit, without ever reaching the overcurrent protection on the BMS.

Even if such a short would not readily impact the battery, on the other hand having the wiring spaghetti catching fire could certainly trigger an equivalent catastrophe, given the proximity to the battery and how closely packed potentially flammable materials are inside the battery deck. 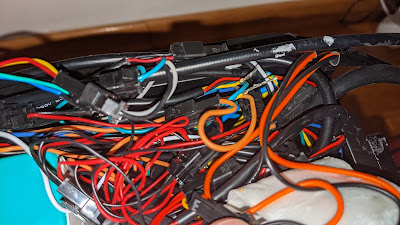 For that effect it seemed important to add proper protection of the low current power rail.

I measured the normal operating current with lights on and with the ESCs active (with the motors spinning) and it was about 0.5 Amps. Pressing the horn adds an extra 0.2 Amps.

As such, I looked forward to ensure that this low current 60 Volt rail is decently protected. Given that this alarm box is in practice the first switch that controls this power rail, I considered that is the best place to protect with a fuse. This way we could protect not just the alarm box, but everything that comes after in the power rail. As such selecting a 2 Amp fuse should be a good compromise between protection and low impact on the circuit (a fuse too close in size to the normal load current, even if it doesn't blow when is not intended, will cause a voltage drop and produce waste heat that can have adverse effects).

And so it was. Basically these alarm boxes have four wires:

In order to add protection, I simply cut the red wire, and added a fuse box containing a 2 Amp fuse: 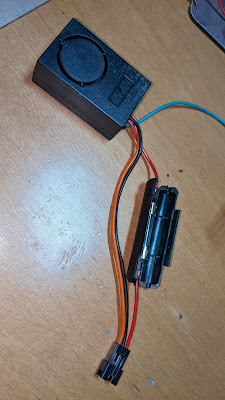 Not too complex and allows for some extra tranquility.
After installing the fuse box I took the opportunity to measure the current consumption of the alarm in different states, and found that it draws 4 mA when it is in the locked state (or unlocked but with the power off), and between 23 and 24 mA when the power state is ON (i.e. after pressing the lightning bolt button on the remote control). The scooter itself is still off during this state - it will only be turned on after pressing the button on the LCD instrument. 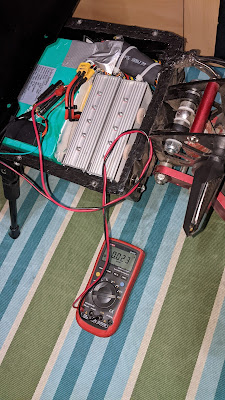 This means that it is very different leaving the alarm in the locked vs powered state. In the powered state, assuming the 38 Ah capacity of the battery, if there would be nothing else contributing to the battery depletion (which is likely not true - there is the BMS and battery self-discharge), then the battery would be depleted in about 65 days. In the locked state, it would last over a year. Of course in reality we can expect lower figures because of these other mentioned factors.

A bit of a (more or less unfortunate) curiosity about this particular alarm box is that the remote control communication does not have rolling codes or any similar security feature. By using a HackRF to record and retransmit the signal, I was easily able to lock and unlock the scooter how many times I wanted. It is clearly a fixed code system. 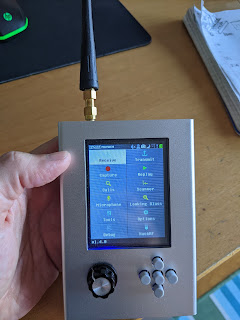 So, something to take into account, if the reader relies deeply on this as a security feature.

Regarding the motor pins that I replaced by bullet connectors, I finally improved it further by replacing the electrical tape with transparent heat shrink. This allows for improved insulation, as well as it provides a protection sleeve that even if the connectors are disconnected, it can stay in place and be visible if the connector was fully inserted. 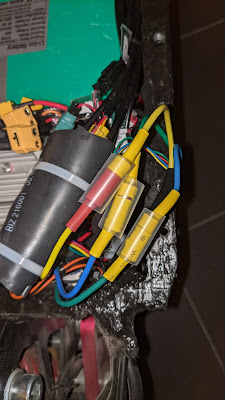 If the reader decides to do the same by replacing the yellow boxes with the bullet connectors, it is important to take note of how the motors are wired. Normally the motor cable colors have no meaning, and do not usually match the colors of the cables in the ESC. If that information is lost, the good news is that there is more than one combination that results correct. If the motor does not spin, normally it is enough to swap a pair of cables.

Great work, thanks for your contributions!