About 6 months ago, I replaced the manual plastic pump I used to have for dispensing water from 5+ litre jugs, with what would in principle be a more sophisticated and convenient approach: looked for an electric water dispenser, and without much searching, found several options. Most, if not all were unfortunately designed to fit into the 19 litre office water bottles. Without any alternative, ordered one of these, considering that I would have to come up with some custom adaptation if I wanted to use it with the 5 litre bottles. Ended up ordering the one below, for its minimally elegant design and compact dimensions: 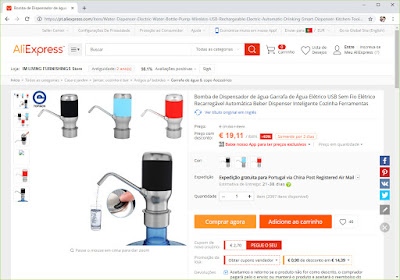 I knew the device was battery operated and had to be recharged once in a while through its micro-USB connector located at the top side of the device.

After the device arrived, I came up with an adaptor, reusing the threaded part from the original manual pump fitted together with another plastic adaptation ring.

In the first few months into the use of the pump, I was surprised with the battery, which provided nearly 2 months of use between charges initially. Later I started noticing a steep decay in the charge, as the battery full indication appeared soon after connecting to the charger.

Once the battery degradation became full blown, I operated the pump with the USB charger always connected, in order to be able to operate the pump, but I did so with some discomfort, as I started suspecting something could be messed up inside, given the fact that water appeared to leak from where it shouldn't (i.e. the bottom side of the body of the pump).

Also I remotely suspected that the battery could be Li-Ion type, which as most of us know it the basic ingredient for causing pyrotechnic mayhem, when brought outside of its mechanical, electrical and thermal envelopes.

As such I decided to disassemble the pump and see what was going on inside. As I opened it, the first thing to note was that it had a lot of water and iron rust inside: 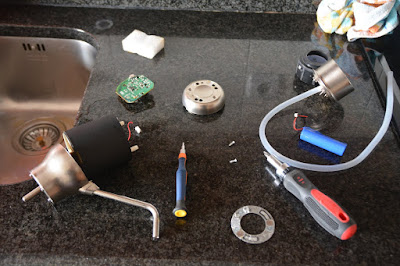 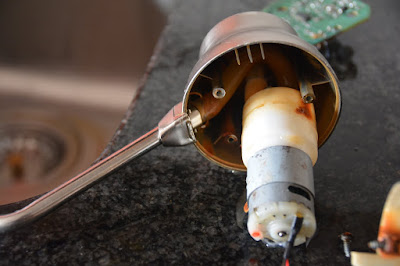 The second thing was the confirmation of my suspicion: it was powered by a good old 18650 Lithium polymer cell (yes the same cell format that was used in several Tesla EV's, for example most Model X and Model S). 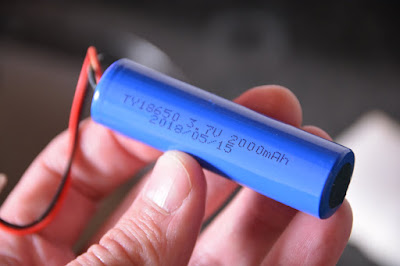 Measured the cell voltage and was at a 0.41 Volts. Either it was irreversibly discharged (to a dangerourly unstable level) or  battery protection kicked in (in case this particular battery had the protection feature). 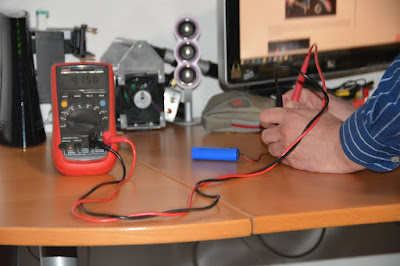 This suggests that the battery does indeed have the protection device built into it, and after some time it must have reset itself.

From the rest of the teardown, I could find significant (albeit not critical) damage to the PCB board of this device. The damage was clearly caused by the permanence of water in the part while electrically connected. Rusting in some pins and degradation of some of the solder mask was evident: 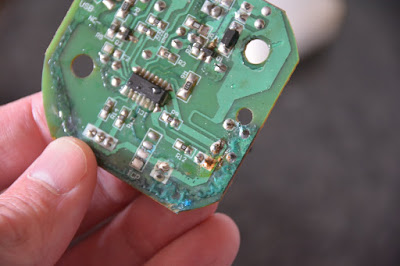 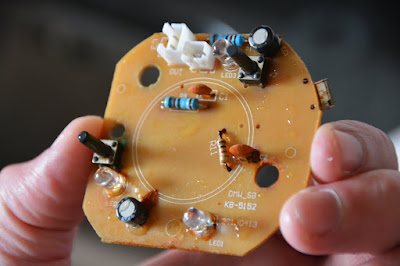 The R11 resistor and C2 ceramic capacitor had completely corroded legs. This could eventually explain the charging malfunction. 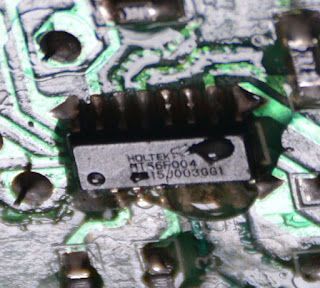 The next step would be to essencially do the same as I did previously with other cheap chinese products: refurbish and perform the necessary changes to make the device minimally safe to operate.
The first change was to discard the battery. In my case it was not important to have the device battery operated, as I had a power outlet near the bottle's usual location.

Next, I had to make sure the pump would not leak any water, and that even if that would happen, the electronics would be minimally safe against water ingress. Even though after  a teardown and reassembly of the water pump, and testing it afterwards, I could not detect any leaks, still I decided to apply sillicon sealant around it, to prevent future leaks. Also the tubing coming in and out of the pump, had some sealant applied as well: 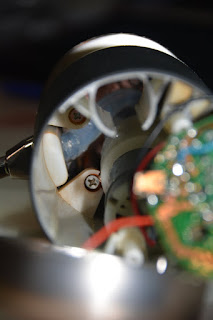 The PCB also received a treatment consisting of a conformal coating of sorts, by covering it with an epoxy resin: 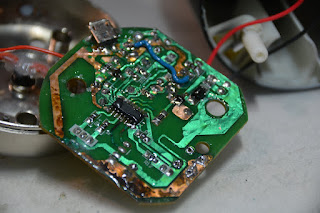 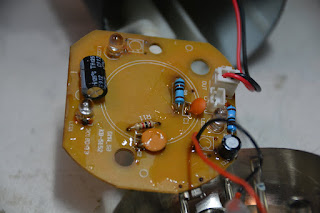 The R11 resistor, the C2 capacitor, and one of the 100 uF electrolytic capacitors had to be replaced due to the corrosion of the respective legs. In order to operate the device directly from the power supply and override to battery charger circuitry, a bodge wire between the USB +5 Volts input and the battery pin was added: 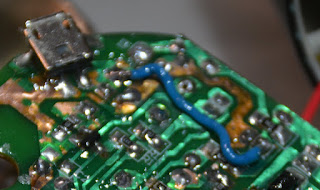 In order to simplify the UX (User Experience) and make the device more reliable to operate, replaced the two on-board press buttons with a single panel type press button: 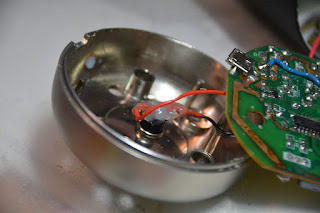 Finished by improving the bottle adaptor and its coupling with the water dispenser: 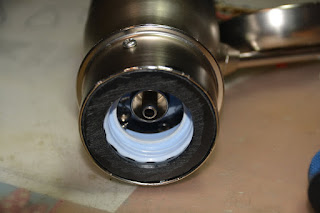 So far the device is working properly and many cups of water filled before and during this blog post: 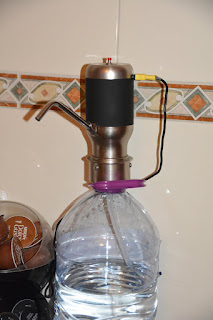