Albeit 10 years of flawless operation can be considered quite good for a home appliance, still when it finally fails, there is the brief criticizing thought of "why didn't it last longer? Bloody programmed obsolescence in modern industry!" ..and so on and so forth.

Well, the truth be said, 10 years of operation without a single glitch is either a product of sheer luck (i.e. one golden batch in the production line), or the brand really went serious with quality and the strategy at the time didn't include the need for recovering the same consumer soon in the product life cycle.

I can say this from the Whirlpool dishwasher model ADP 6837/1 that I have been using since 2009. During 10 years it never complained, while we threw dirty dishes at it on a daily basis. 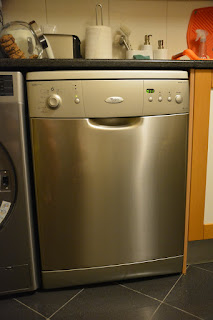 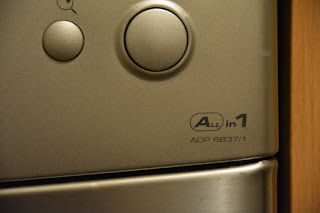 Today it finally decided to refuse to finish a washing session, exhibiting an "F1" error in its display. Looking up on-line, quickly found that it means there is a problem in its NTC thermistor device.

As those in the field probably know, an NTC (short for Negative Thermal Coefficient) is a small (passive) component that suffers a predictable change in electric resistance, as the temperature changes. Being of the negative type, it means that as the temperature raises, its resistance value drops.

Given that the error points to such a specific device, I though it would be reasonably simple to find the sensor and confirm the fault.

The first challenge was exactly where to find the sensor: given that I could find very few servicing information for this washer in the web (the closest I could find was for another model, the ADP 6600, which in spite of many similarities, I came to find that it had a totally different sensor..), I was limited to opening up the machine, explore and go by the elimination method.

First, removed practically every panel that prevented me from looking at its inner workings: 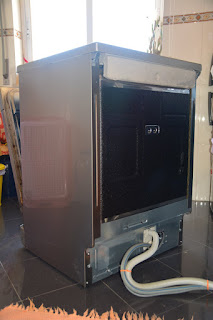 The first step, removing the top lid and the weight: 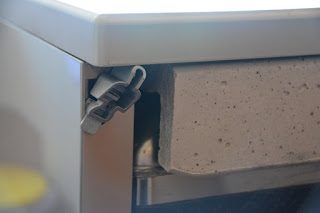 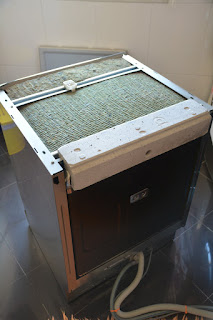 Then, one side panel off as well: 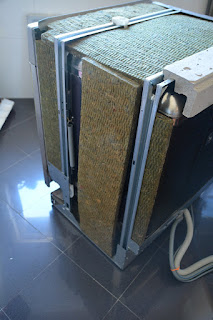 This allowed to have visibility over the motor/pump/heating assembly: 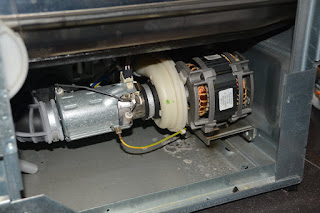 Still, I wanted more, and removed the bottom panel: 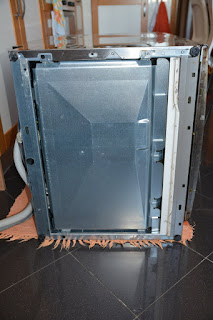 This provided access to most of the bottom components of the machine. It is notable the water softener device, the sump, the wiring and the pumps and valves: 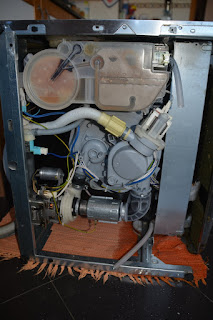 In the ADP 6600 service manual, the NTC showed up as a discrete device. I started the search assuming that I would also have to find a discrete NTC in this machine. But I simply could not find anything looking like what I was expecting: a device with a 2-pin connector somewhere in the bottom of the water sump. The closest match was something with 6 pins which I initially ruled out as being the NTC: 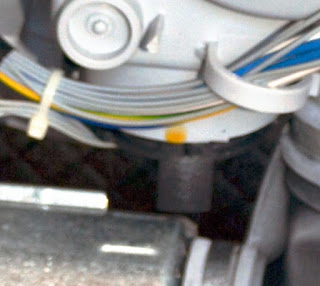 So I decided to continue with the teardown, and went on with opening the front door of the washer, which contained the control panel. Here I found two modules. The left side one, which appeared to house the main controller: 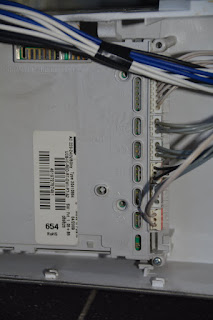 and the right side module, which apparently was just the user interface part: 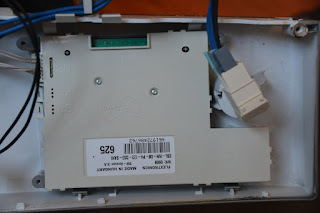 From the first module it was easy to tell that the NTC had a 3-pin connector, which apparently was grouped with another 3-pin device: 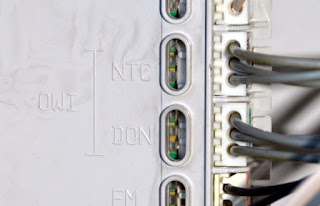 This made me look back to the 6-pin device that was at the bottom of the water sump.

As I removed it, I was able to quickly find that it was not only the NTC, but also a turbidity sensor, both in the same package.The later was a relatively novel sensor in 2009 dishwashers, which allowed the detection of the amount of foam in the water. With this information the washer is able to better manage when to add new water to the loop, therefore leading to water consumption savings. Bitron detains a patent over this type of turbidity sensor, and it was the OEM chosen by Whirlpool for this particular washer. 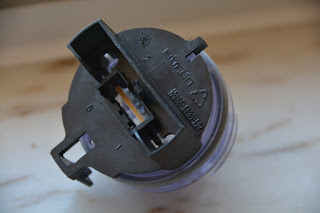 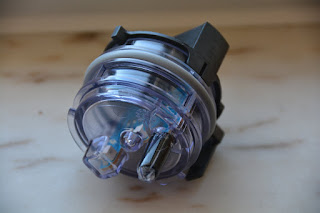 With the sensor removed from the sump, tried to determine if it was actually failing. by doing a simple test: first, measured the temperature at which the sensor was initially: 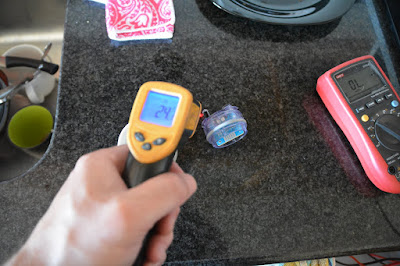 and measured the resistance across the NTC: 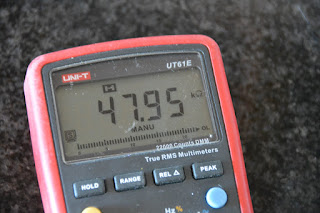 Then took a cup of water heated at about 50ºC, inserted the sensor, and measured again: 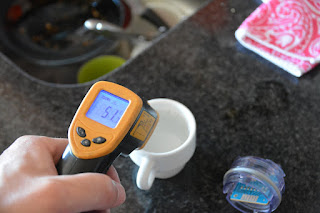 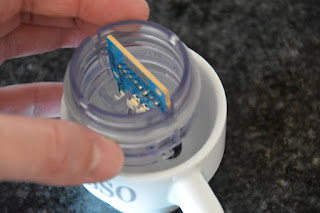 As expected for a working sensor, the resistance dropped considerably: 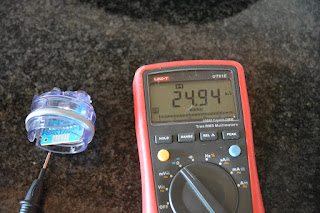 Performed one last test with the water at about 70 ºC, and the resistance further dropped to around 8 kOhm.

Comparing to the table in the ADP 6600 service manual (in spite of not being the same model), the results were very close to the table shown there:

This seemed solid indication that the NTC was actually ok.

As such it led me to consider two scenarios: either the F1 error actually derived from another faulty device, or it was an intermittent failure motivated by poor electric contact or similar problem somewhere.

Decided to put everything back together, close it all up, and power it on for a test.

Initially the error still showed, but as I read in the documentation this was normal, as this type of error would be stored. To clear it, had to press the start button for 1.5 seconds. The error disappeared, and as of this writing a full washing cycle was completed without problems. So far success and zero parts replaced, only a little massage to the inner workings.

This may well have been the golden batch of the Whirlpool dishwashers...