After I bought my first RTL-SDR dongle (regarding which I made this post covering APT satellite (weather) image reception: http://creationfactory.blogspot.pt/2013/03/receiving-weather-satellite-images-with.html ), it's been sitting on the bench without much use. More recently I found extra stuff that could be interesting to take a look at, such as ADS-B reception (decoding commercial aircraft transponder signals) and less earthly things such as a doing some radio-astronomy, which includes for example trying to detect the 1420 MHz hydrogen line RF signal emitted from within our galaxy (it's a very exact frequency almost as accurate as our atomic clocks).


But for some of these things I needed another slightly more capable dongle. My first RTL-SDR dongle (which by the way is just a re-purposed DVB-T television USB dongle) had a Fitipower FC0013 tuner, which is limited to the 22-1100 MHz range. Besides this limitation, it did a pretty good job

Meanwhile a new tuner chip appeared in the market, the Rafael Micro R820T, with many USB dongles using it (most of these currently). I decided to buy one (for only 10 €, the typical cost of these gadgets). It has a greater spectrum coverage than the Fitipower (24 - 1766 MHz), and the interval is free of gaps (some other dongles exclude bands used by GSM/3G in some contries).

These dongles are not perfect (even though for the price we cannot complain much). One of the issues is bad image rejection in the lower frequencies (i.e. strong stations appear replicated in multiples of its frequency). This is mostly caused by the fact that the RF frontend is poor in band pre-selection/filtering.

Another issue is the plastic enclosure, which does not offer any shielding against local interference. Also, these devices are a bit optimistic in respect to line interference, by not providing much line filtering on the USB power rail. 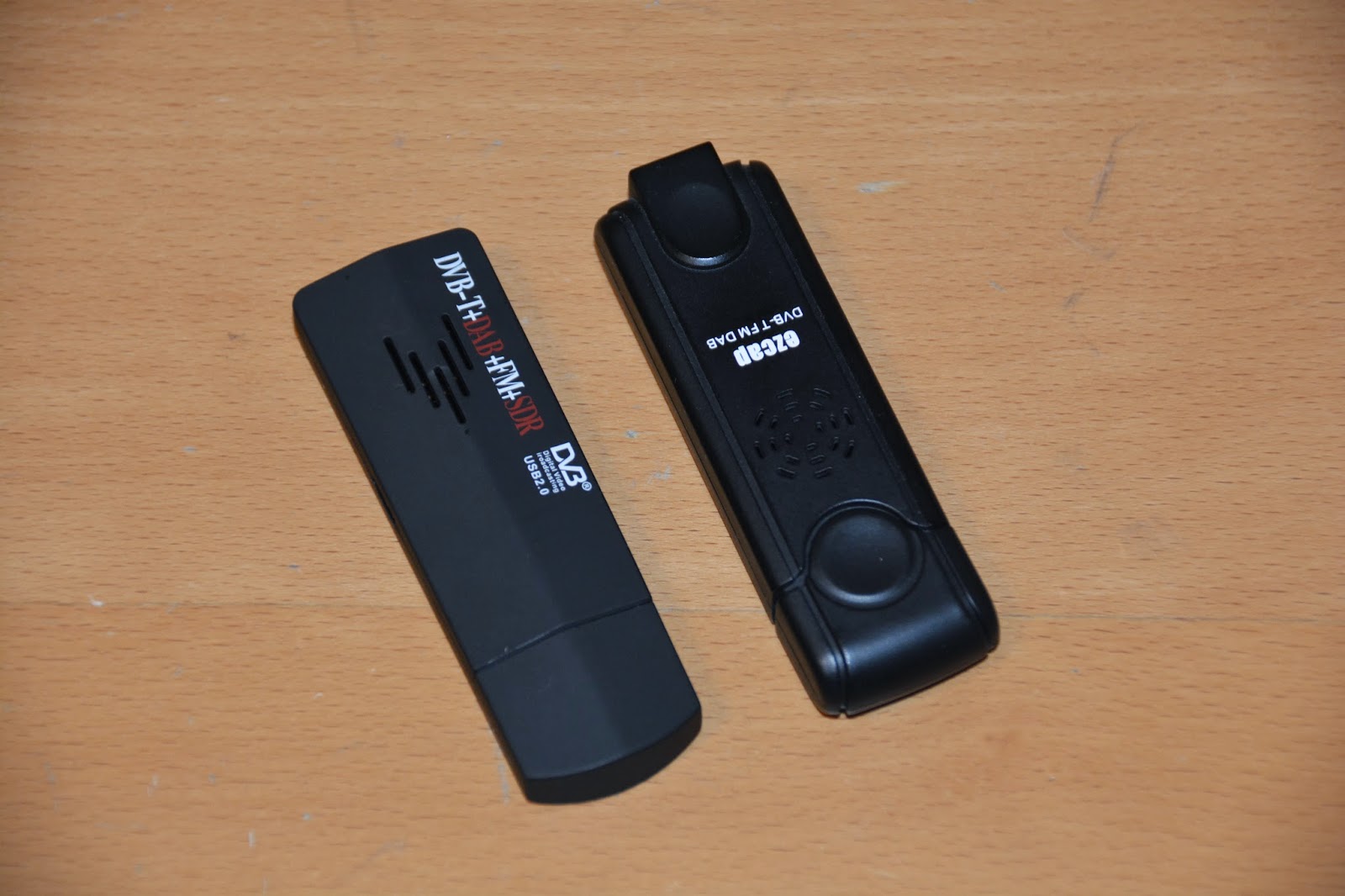 One last issue, which for now I am not much concerned about, is the clock stability. These devices use the cheapest clock option, by being driven from a single 28.8 MHz crystal, and a couple of capacitors. This is a very temperature sensitive setup, drifting as the environmnet heats up or cools down. Also the production tolerances are high, leading to large offsets from the expected frequency (therefore requiring calibration). A solution for this problem is to replace the crystal with a TCXO (temperature compensated crystal oscillator) of the same frequency. This is however a costly option which I will leave to the side, and get back to it only if needed. For the kind of stuff I am doing now, it is fine as is.

In order to address the local RF interference and line interference related to these dongles, I went for the relatively radical solution of stripping the PCBs off the plastic enclosures and put these inside an extruded aluminium enclosure: 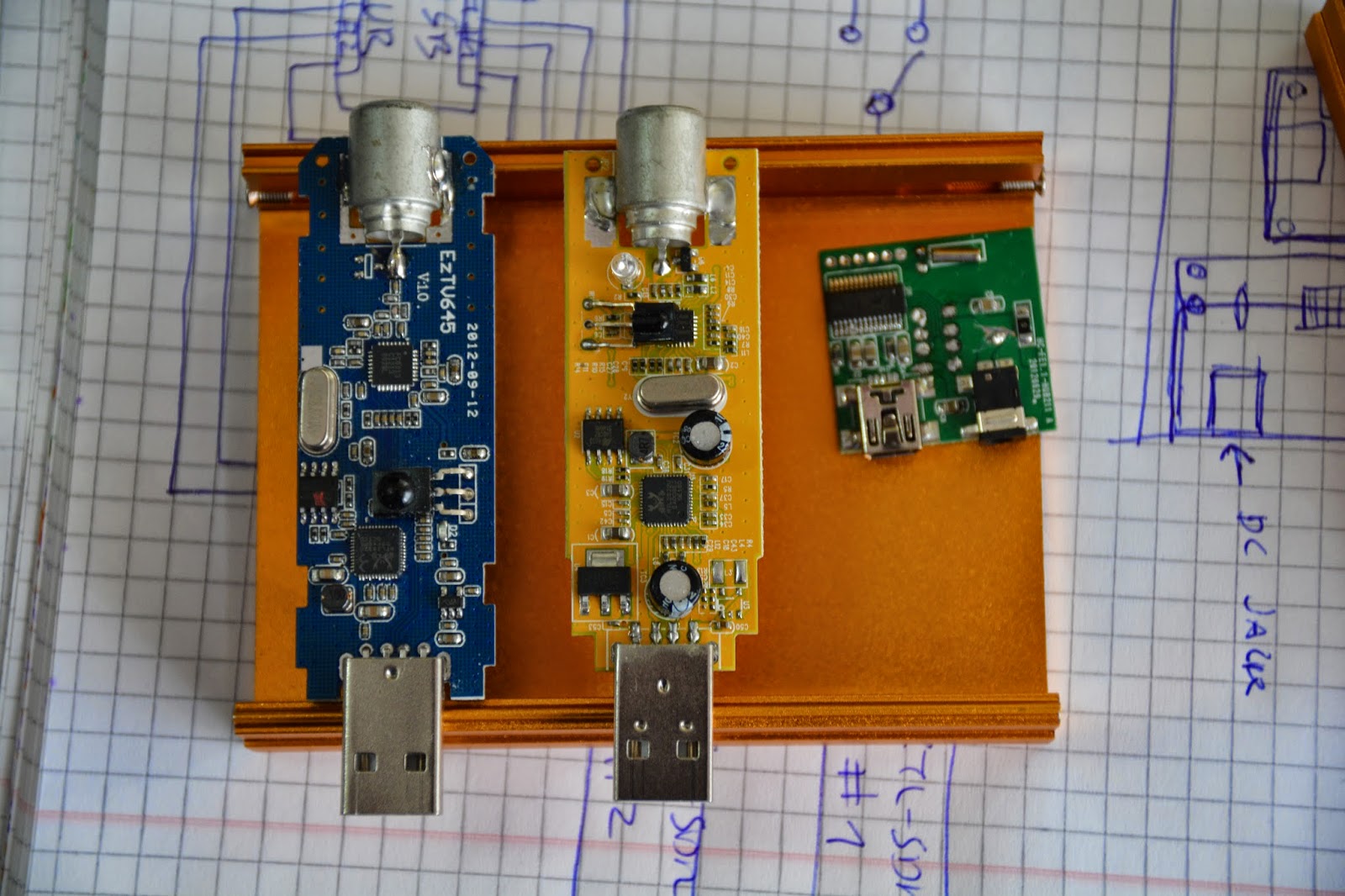 The original PAL antenna connectors, the USB plug and the IR receivers were removed. Regarding the later it was both because of being useless for the intended application, and for its eventual contribution to increase noise (however marginal it may be).

The antenna connectors were replaced with proper BNC connectors, that in spite of being 50 Ohm instead of 75 Ohm it shouldn't make a very significant difference (the same would not be true if the module would be a transmitter as well). 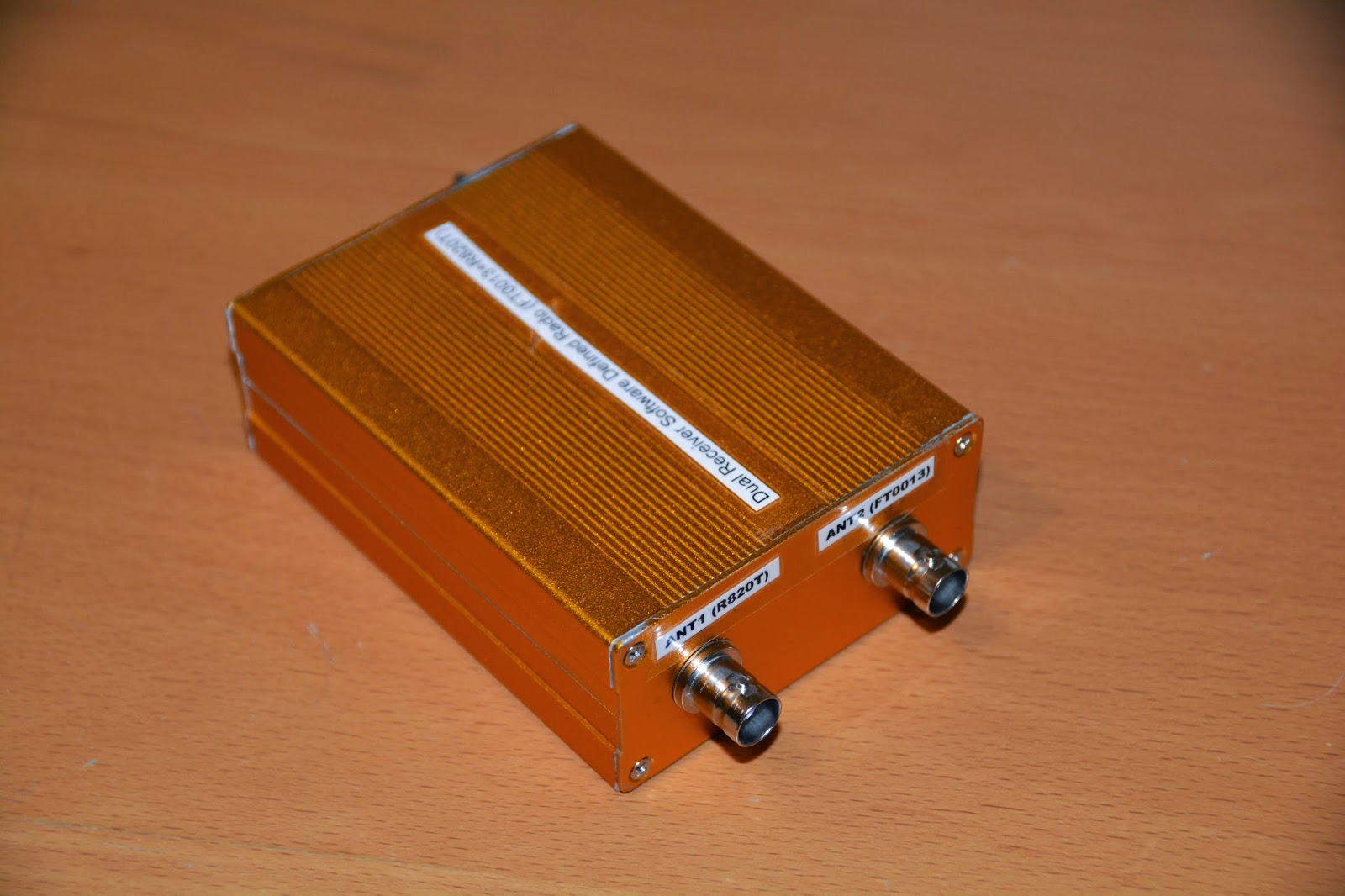 The line filter adopted consisted of a choke of about 8 turns in each of the two coils, and 27 pF ceramic capacitors between the 5 Volts rail and the GND in both sides of the choke:

As I wanted to have the ability to power the two SDR's from either the USB port or an external DC source, I have added a panel switch, to allow the user to select the desired power source. By enabling the device to be powered from an external DC supply, a better low noise DC source can therefore be selected. In either case, the common mode filter stays in the power rail, to even further diminish line induced noise. 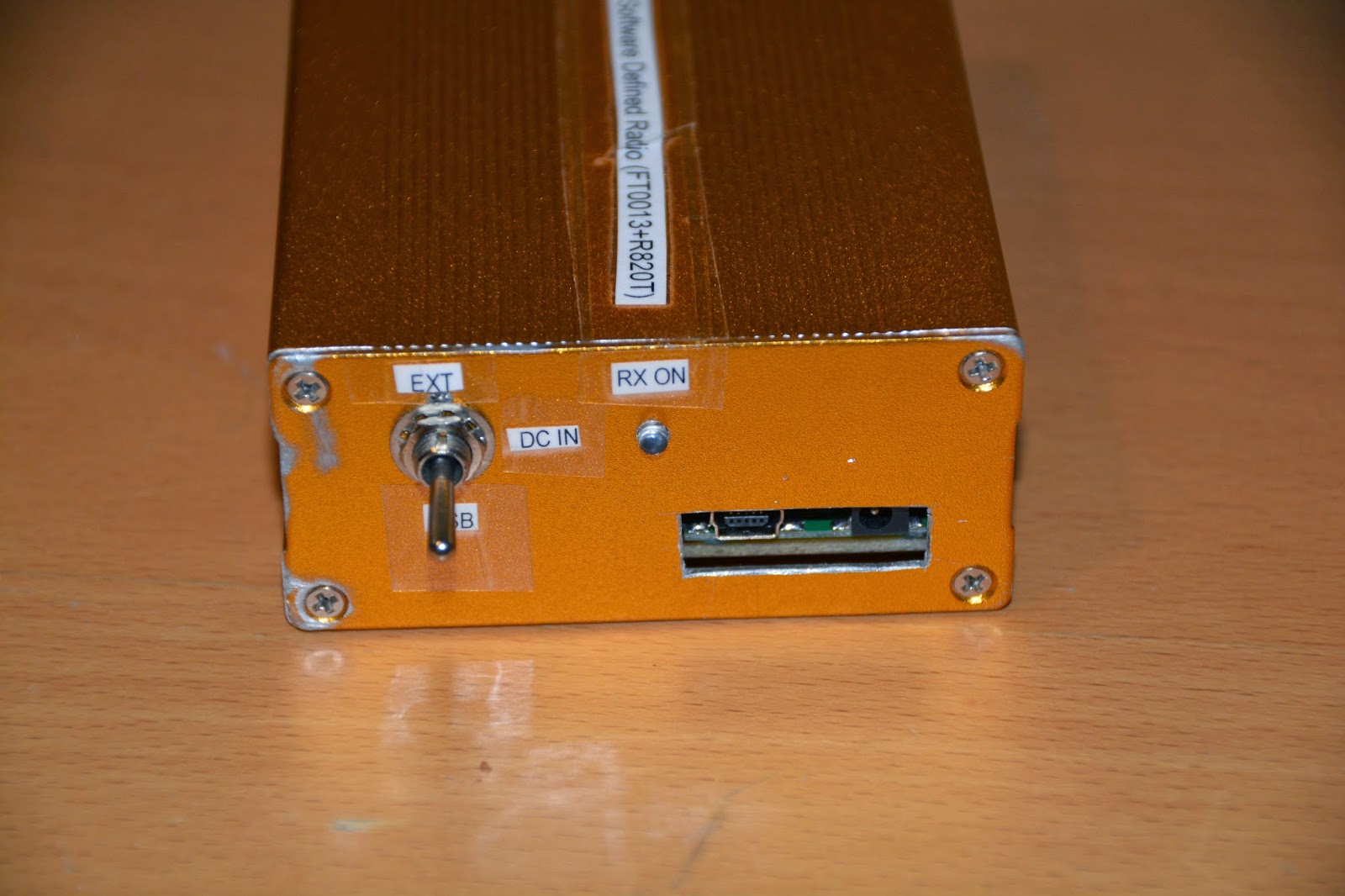 Because two dongles are put in the same enclosure, it wouldn't make sense to have two USB cables leaving the enclosure, one for each dongle. As such I have bought a cheap 4-port USB hub (the smallest I could find in a local store), stripped its PCB outside of its original enclosure, dessoldered the USB sockets and 2-socket daughterboard, and placed the bare PCB of the hub over the base PCB, right next to the choke filter: 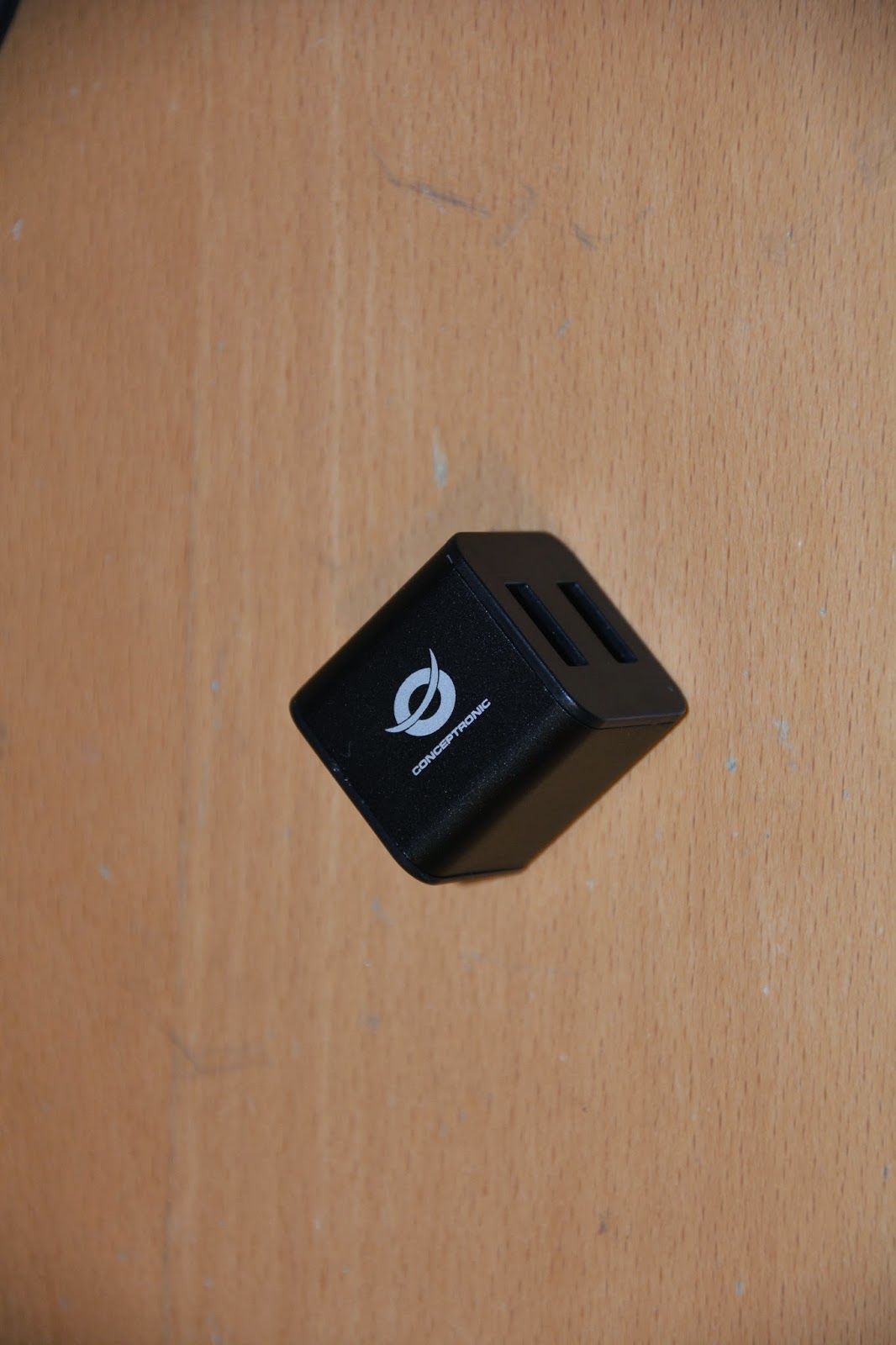 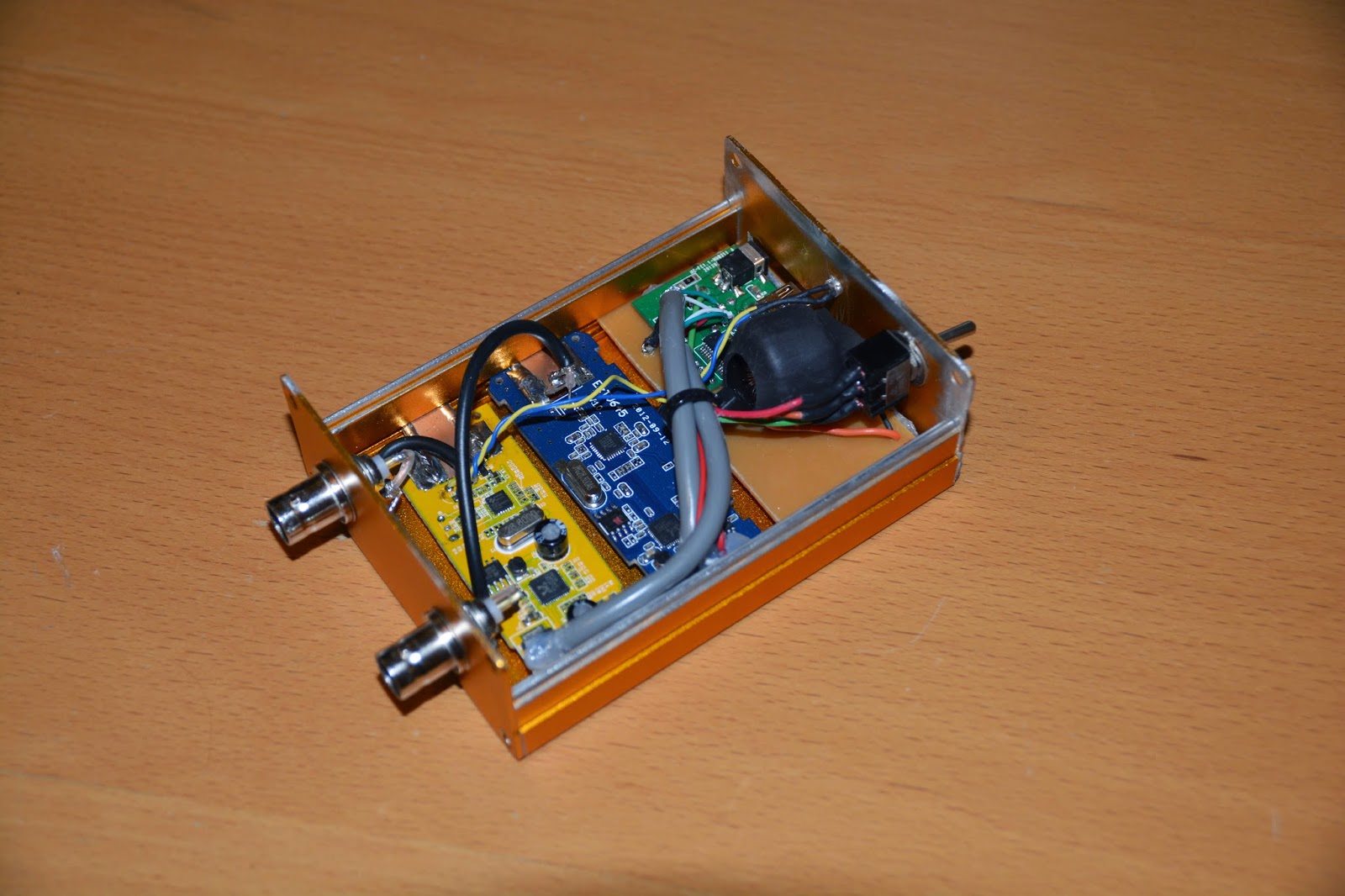 To keep interference to a minimum, especially between adjacent PCB's, a two wall shield was built, in order to electromagnetically separate the three circuit boards: 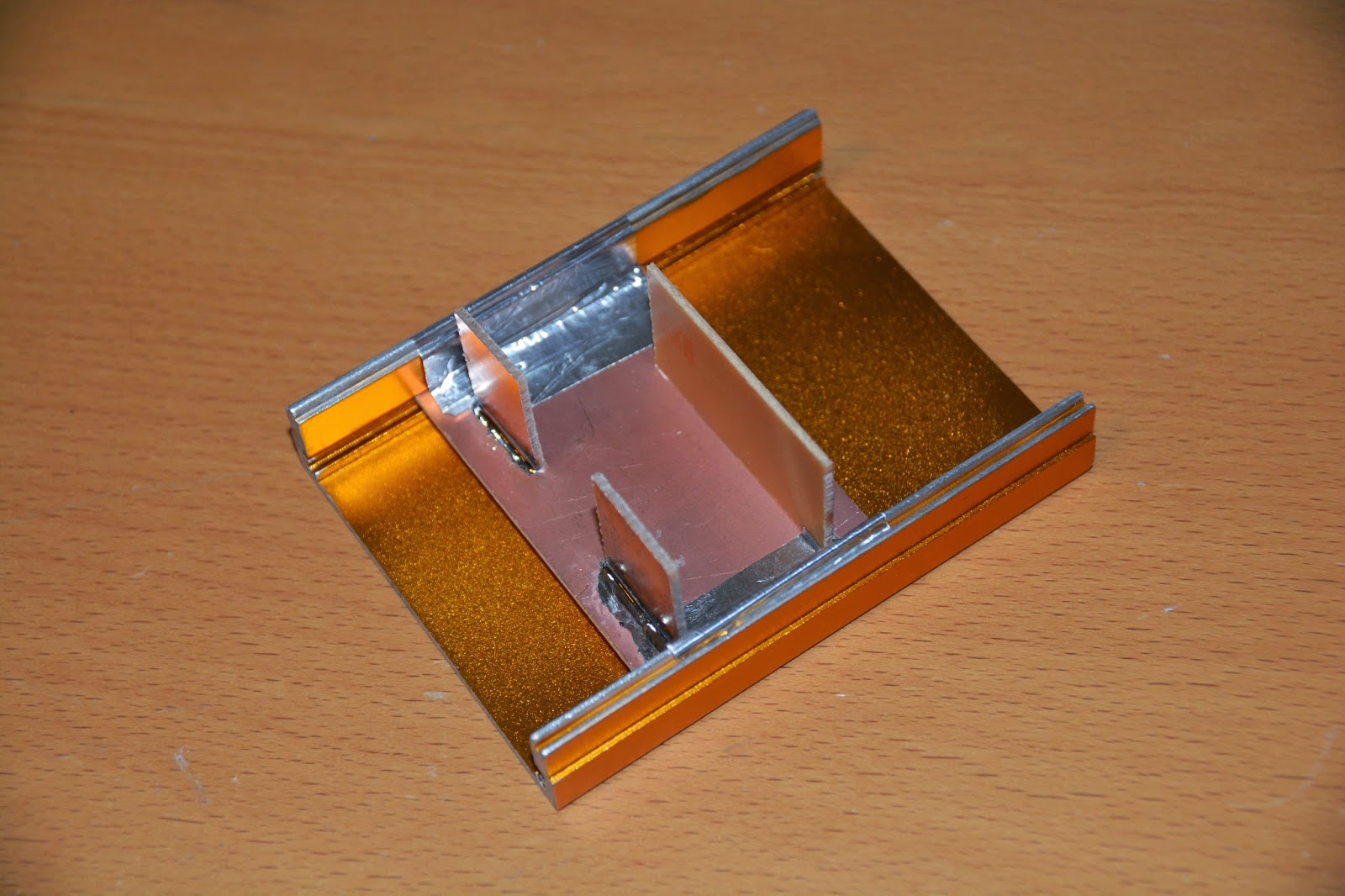 This shield is in contact with the enclosure, providing a GND reference for the signals. It only has the gaps for allowing the necessary cabling to pass between the boards.

Even though I did not established a reference for comparing the before and after the change, I could perceive a noticeable decrease in the background noise, by looking at the FFT waterfall display of the radio application. 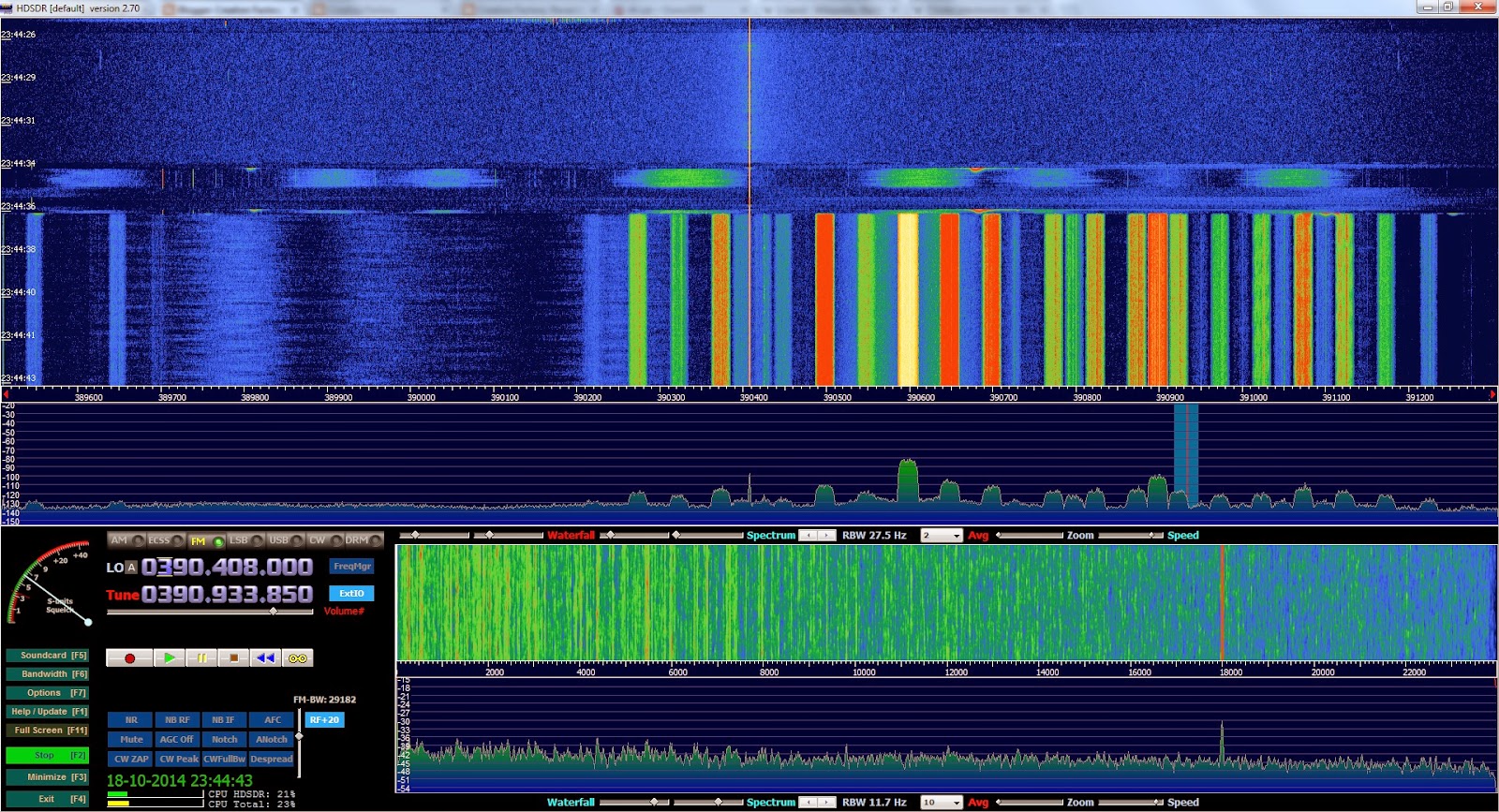 Besides the functional quality improvements, the physical robustness of the setup could this way also be improved, in which case the SDR's are well protected inside the solid aluminium enclosure. Also it is more convenient and a less cluttered solution than having multiple dongles protruding from the PC USB ports. 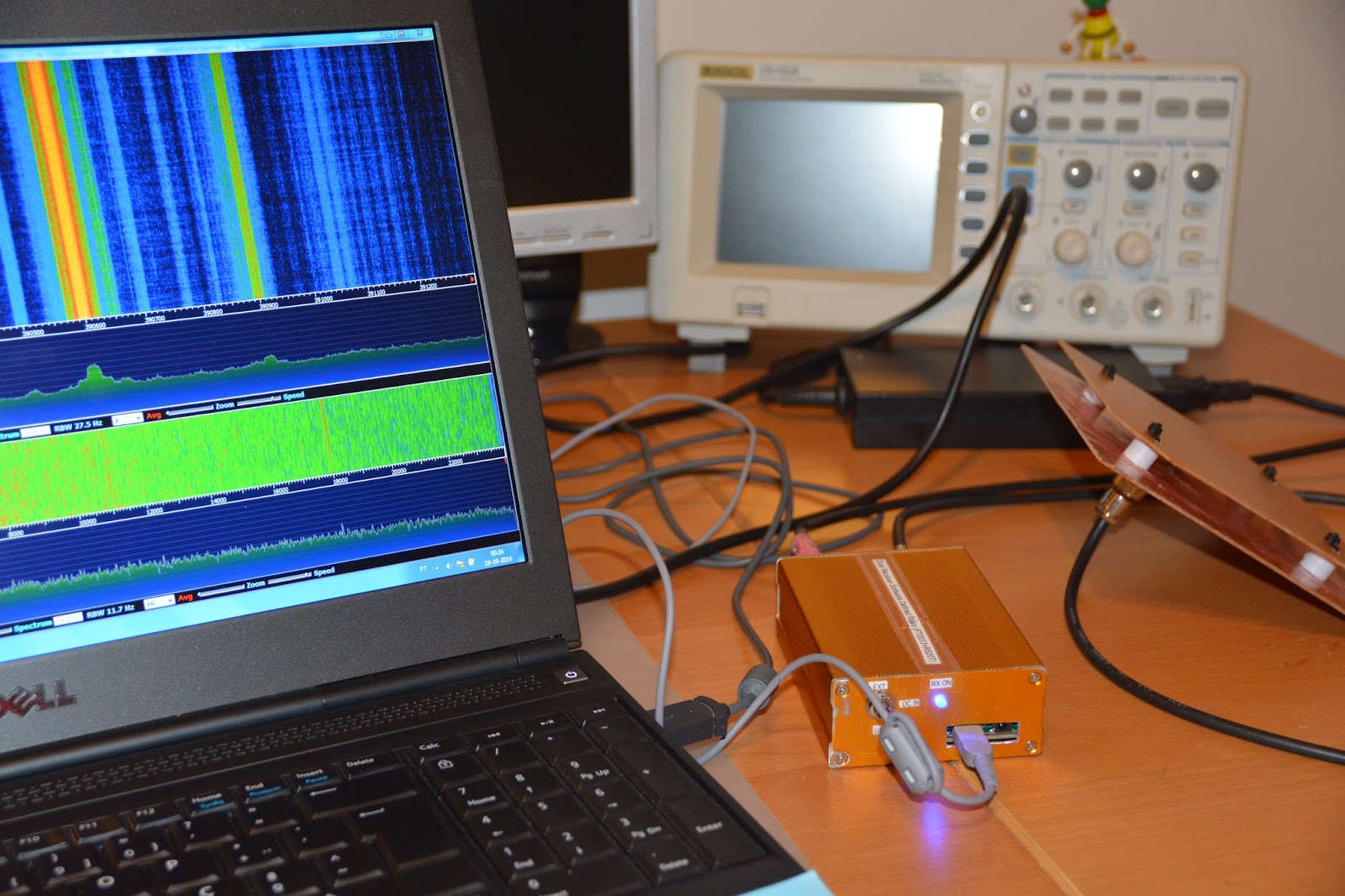