Smoke test after a lot of changes

It's always a stressful moment when after many changes something is put to the test. This was the case, taking into account that since the last flight there was a replacement of all ESCs, upgrade to Arducopter MPNG 3.0.1 R4, installation of PPM Sum module, addition of voltage and current measurement, and use of a higher system voltage (4S instead of 3S LiPo). 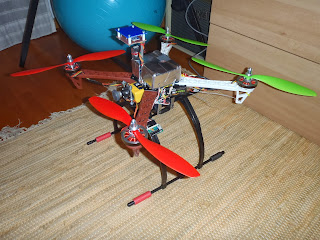 Fortunately the test went well, with the quadcopter having no problem taking off from the bed at less than 50% throttle. It demonstrated to require further work with the PIDs, as the stability only became close to rock solid when the rate P parameter was dialed to nearly the maximum. On the other hand it seemed a very nervous and responsive platform, which impressed me positively, taking into account the much greater inertia of the rotors compared to the previous configuration, and the increased weight of the quadcopter. Still I will stress some more on ground tests to make sure the PPM sum solution is reliable. This is an important component, because like most elements in these machines, it is a single point of failure. And from my observation, the flight controller firmware doesn't seem to handle loss of sync with the PPM signal very well (it appears to only get back on track after a few seconds). And of course in this context, a few seconds are the time between flying and crashed on the ground.

The ESCs also impressed me well, because these were barely warm after a few minutes hovering over by bed. Comparatively the other ESCs would heat up more in a similar run.

In a way during this moment I felt like these guys must have felt here (at a different scale though :) ):