With the arrival of some of the parts I have been waiting for, more work accumulated with the finishing of my 2nd quadcopter. The parts were the landing gear and the quadruple ESC: The landing gear arrived with all the necessary parts as expected, including the lower crossing bar and the foam rods. The bar and other rods are all made of carbon fiber. The 4 support rings (for attaching to the frame) all had a rubber ring which helps to further dampen the vibration to additional items such as a camera: 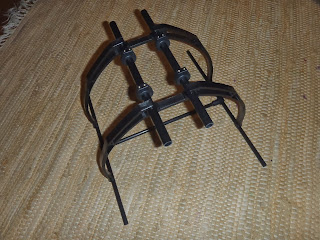 The ESC arrived in good condition, however the motor leads were too short. I had to replace these with others twice as long: 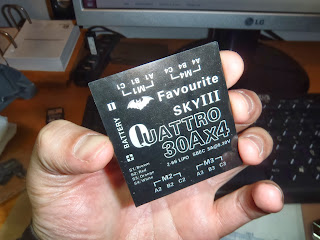 It was a good opportunity to look at the hardware in detail: 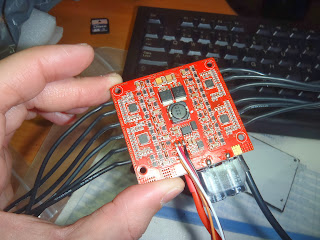 As expected it had four Silicon Labs C8051F330 microcontrollers, a switching regulator for the 5 Volts, and a 12 Volt linear regulator for the internal circuitry (probably to drive the FETs). The exact FETs were the unknown for me, but I was not disappointed. It came with 24 N-FET transistors, the LR8726, from International Rectifier. This means that each ESC has 6 of these FETs, one for the high side and one for the low side of each phase. 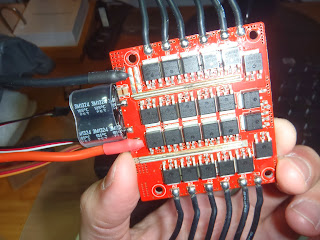 This particular FET has nice specs such as a continuous drain current of 86 Amps at 25ºC, and 240 Amps pulsed (see datasheet at http://www.ic-on-line.cn/download.php?id=1385849&pdfid=37BA6E6F8F046C088D69C9B7CBB08734&file=0197\irlr8726pbf_4532756.pdf). This gives me some comfort, at it is an indication that the manufacturer was conservative in the selection of the part, giving a good margin between the capability of the components (86 Amps) and the rated max current of the ESC (30 Amps, 40 Amps peak). Of course that the switching nature of the application makes it more important to play safe in the selection of the part, as datasheet values illustrate a DC scenario. For the landing gear I had to make four aluminium support bars to integrate it with the helicopter frame: 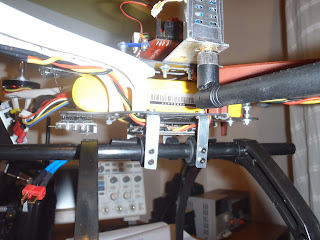 This was the solution that allowed me to have space under the frame to accomodate the ESC. Finally I flashed the 4 ESCs of the 2nd quadcopter with the latest release of SimonK. Was a boring and painstaking process of soldering the ICSP connector into the tiny pads of each ESC, repeated four times. At the end I put everything together, but while bolting the flight controller after reorienting it in the frame, I touched one of the piezo gyros with the wrench, and its lit popped off. I put the lid back and added hot glue on top, but during the first test running the motors, I realized roll sensing was lost. Perhaps air contamination or some mechanical contact damaged it. This is probably a justification to replace this KK board with a new flight controller.. And here a view of the quadcopter inventory, with the two machines in a near ready condition: 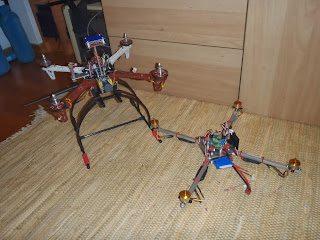 Next effort will be to take care of the power supply for the video system, and make further tests to ensure everything including the PPM Sum are reliable enough for a test flight. The 2nd quadcopter will have to wait for a new flight controller.
at 12:51 PM