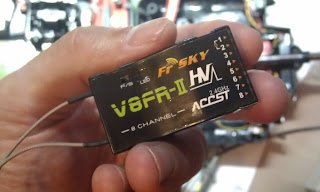 After assembling my quadcopter, one major issue I stumbled upon was the (lack of) quality of my radio system.


From the two RX modules I had, I discovered the hard way one was not receiving enough signal, causing severe glitches as the signal would fade away. It was something defective in the RF part of the module. I tried the good module, but I knew from my previous experience with the collective pitch helicopter that reliability was not part of the package. Besides being an analog module, it was of very poor quality with no method for filtering glitches caused by interferences or lack of radio signal. I am in particular, talking about the Art-tech E-fly 100 C radio system that is common in several Art-tech RTF products. This includes most collective pitch helicopters as well. This manufacturer has a variant of these radios that operate in the 2.4 GHz band. These may be substantially better, but I have never tested any. I was not in a mood for increasing my investment and buying a brand new radio system. And that was when I stumbled upon the  V8HT 2.4 Ghz DIY Module from FrSky.

Other than its democratic price, it is quite popular among model airplane hobbyists for its range and glitch free performance. Some users have even reported several kilometers of range through some improvements in the antennas. On the receiver end I selected a compatible FrSky receiver. It is worth mentioning that these modules support up to 8 channels. However in my setup I am only using 4 channels (throttle, yaw, pitch and roll). Typically multicopters do not require more channels unless you add extra components such as a camera and pan/tilt servos. As such I had to select an appropriate receiver. I went for the FrSky V8FR II 2.4 Ghz 8CH Receiver.

FrSky also has more sophisticated radios that include support for telemetry. This is very interesting stuff. After doing some investigation on the hardware these devices feature, it was a good surprise to see that these are based on the Texas Instruments CC2510, which is basically a system-on-chip device that integrates both the 2.4 GHz transceiver and a 8051 based microcontroller (http://www.ti.com/lit/ml/swrb007/swrb007.pdf). I could confirm this was part of the hardware on the receiver. It also integrates an rf switch and an rf amplifier (to boost the power from the 0 dBm provided by the CC chip itself to something in the vicinity of 18 dBm maximum). So in spite of being a receiver module it can actually send signals back to the transmitter (probably required in the pairing process). This may suggest that from the hardware point of view telemetry could be be supported, and that the telemetry enabled modules may not be very different (hardware-wise).

On the transmitter side, I had three things to address: find a spot inside the radio where to fit the module; get the right points from where to tap into the PPM signals; and get a proper source of power.

Finding a spot where to put the module was relatively easy as there was quite a bit of clearance inside the radio. The most important aspect was to select a place that wouldn't interfere with the movement of the gymbals.

Tapping into the PPM signal meant finding the right points from which to obtain a decent signal. My initial thought was to get the signal from the connector that links the main board to the original 41 MHz transmitter board. First I have probed the signal with the oscilloscope and the levels seemed ok, nearly 5 Volts TTL. 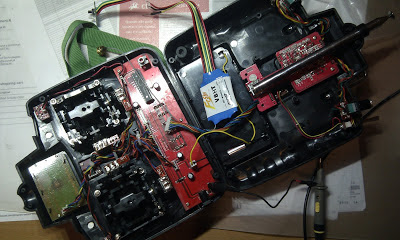 However upon connecting the DIY module I noticed that this line could not handle the impedance of the module. The voltage of the signals would drop to a level below the minimum necessary to work. I did another test without the 41 MHz board connected (assuming the resulting lower impedance of the two circuits in parallel would be the cause) and still it didn't work. The DIY module was not receiving the PPM signals. Then I traced the PPM signal in the main board all the way back to the microcontroller (a Holtek 8-bit OTP microcontroller fitted in a DIP socket). There was some circuitry likely used to provide some decoupling and level shifting for the RF board and the the 3.5 jack output of the PPM signal for the flight simulator PC adapter. 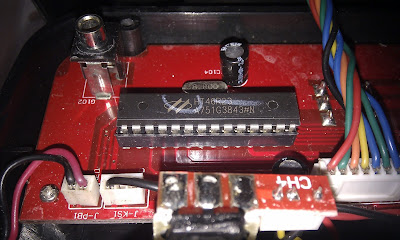 By tapping into the fligh simulator output it would work like a charm. Before finishing the install, I tested with the flight simulator adapter connected to see if it would still work properly with the DIY transmitter in operation. The result was positive. No interference or jitter noticeable.

I wanted to preserve the original 41 MHz radio in case I would need it in the future. So basically I added a switch to the front panel of the unit. The switch is a SPDT with a neutral position. All I had to do was to use it to switch the 12 Volt power rail (coming from the batteries) between the 41 MHz RF board and the DIY module (yes, this module accepts a wide range of voltages, between 6 and 13 Volts). In the neutral position no power would be provided to either TX module, a particularly nice feature when using the unit for the flight simulator, allowing for battery and RF spectrum economy. 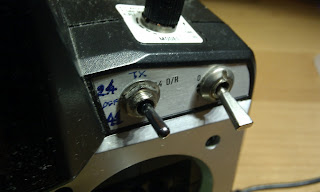 Regarding the control board of the module (a button and status LED, where the first is used for pairing and switching the TX output power level - supposedly it enables or disables the RF amplifier chip that is placed after the CC2510), I had to also select a location in the unit where to put it. The same applied for the RP-SMA connector for the 2.4 GHz antenna. I selected the top part of the unit, relatively close to the 41 MHz antenna. Without many practical alternatives, this was the best option. 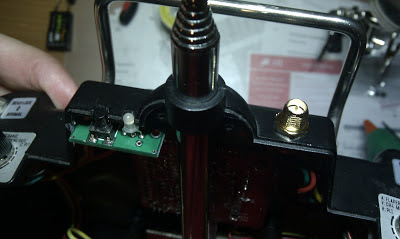 Finally, closed the box, installed the receiver in the quadcopter and went for a test flight. The result - perfect. Absolutely no glitches, and steady flight control. Range test in low power revealed good results - putting the transmitter and receiver in opposite extremes of my apartment while moving a servo connected to the receiver, didn't produce any rupture in the communication. Pretty nice, considering that there are walls and all sorts of obstacles in the middle. Didn't had the change to perform a full range test, but given the true specs of the hardware it is not hard to believe the 1+ Kms figure is likely correct.