Having been refered to in this post, a very important tool for easy cutting of the bare polystyrene boards was custom built because of saving some money.

While these can be found on the market, good models with adjustable heat may cost over 30 euros. By analysing the kind of hardware I would need, I found that it wouldn't be such a big problem because I already had most of the stuff in my electronics scrap containers.

The only thing I didn't had laying around was the support for the hot wire, which I had to buy. I just used a metal support with a wooden holder for a conventional saw, which proved to serve the purpose just fine: 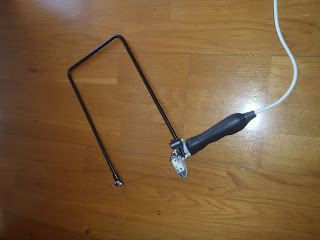 One of the challenges would be to get the proper material for a hot wire. While materials such as metal guitar strings can be used (these usually have a high electrical resistance), these however tend to corrode with time and heating cycles. A good material is nichrome wire, commonly used in heating resistances. It doesn't corrode easily, and it withstands a relatively high temperature of about 1400 °C. More than enough for the styrofoam cutter. I was lucky because I had a broken electrical heater which had a resistance made of nichrome, and a very good length of this material (a 2000 Watt / 220 Volt resistor). Enough to replace the hot wire several times.

For safety reasons, and because of the reduced resistance of the length of hot wire needed, it could not be powered directly from the mains power. Otherwise it would blow, and the user be electrocuted (because the metal structure of the cutter is connected to one of the terminals, and the wire is also an exposed conductor).

As such two requirements had to be satisfied: the voltage reduced to a safe level for humans to touch without hazard, and to provide just the current needed by the wire to heat to the point of cutting the styrofoam. A galvanic insulation between the mains and the cutter would also be necessary in order to again, eliminate therisk of shock hazard.
I measured the required length of hot wire to be at around 1.5 Ohms. By doing some research I figured out that the power dissipation had to be at around 10 Watts for the hot wire to properly cut the styrofoam. This meant around 2.6 Amps of current.
I searched though my scrap parts if I had some transformer that would satisfy this current, and found one from an old VCR that seemed to be able to do the job. This was from a time when linear power supplies would be dominant in consumer electronics devices. Currently, these are mostly replaced by their switching mode counterparts.

I still had the problem of how to vary the power. I could add a a circuit to rectify the output from the transformer, switch it through a FET, and control the switching via PWM with the help of a timer such as the 555, but this would add some effort and complexity, so instead I considered a different approach:
I had a light dimmer that didn't use for anything, so  connecting it to the primary side of the transformer should allow a similar result to be achieved. And so it was. Assembled the dimmer and transformer inside an insulated electricity box I also had from a previous project, and tested the entire rig. 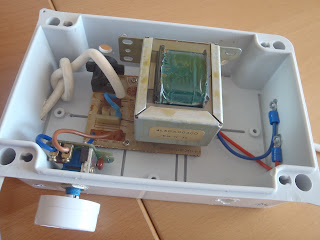 It worked perfectly (apart from the minimum position in the dimmer still producing power, actually the level necessary to cut the styrofoam). By increasing the power it enabled the styrofoam residue to be vaporized, acting as a cleaner for the hot wire. Increasing the power even further would get the wire red hot. At this power level it is not however likely to be healty for the transformer, as it may melt the enamel of the windings due to the excess current, causing the primary or secondary coils to fail. I didn't however modified the dimmer to have a power limit. It would also have been interesting to allow a lower or even zero minimum power level, which is not the case. Actually in the minimum position this dimmer provides just the ammount of power necessary to cut through the styrofoam. Maybe in the future this can be fixed.