LENA - The Geiger Counter that was finally made portable! 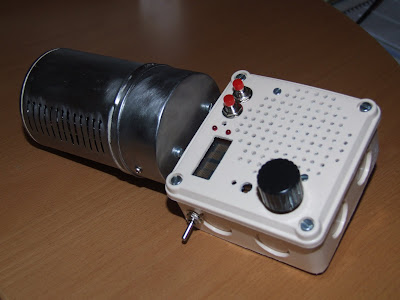 With the Geiger Muller tube module having been posted in a previous post, namely here, another important development was missing. While fully functional at that time as a sensor device which could readily be interfaced with via I2C, or having the pulses be directly picked up via a dedicated TTL signal, by itself the device could not be carried on the field and be expected to operate without additional hardware.


This is where the user interface module I am presenting here comes into play. Having been baptized after my daughter's name (shortname for Helena), it is also acronym for a more elaborate name: "Lightweight Energy and Nuclides Analyser". Since the beginning I have looked forward to adopt a modular approach and allow the probe element and its intrinsic electronics to be decoupled from the user interface, data presentation and power supply/management part. This would allow different types of sensing elements to be used. For example instead of a Geiger tube, a semiconductor based device. In this case both the detector element and the associated electronics are inherently different.

As such the idea was to build a battery powered compact device, featuring a display, control buttons and audio amplification for the pulses. This device would couple with the Geiger tube
module through a connector for carrying the I2C bus signals, single event pulse and power.

For the solution I looked forward to select an appropriate microcontroller. I considered a few basic requirements:

Having some familiarity with Microchip PIC devices, I have analysed the specs of several models, with special emphasis to the PIC18 family, and found the PIC18F2455 to be an adequate choice. This device
has a broad range of features and in spite of not being part of the XLP family (eXtreme Low Power), it still has a reasonably low power consumption (which of course still depends on several factors including user options). Besides I2C support through its MSSP peripheral, it also supports serial communications, and with greater relevance, has integrated USB capability. This provides great flexibility for interfacing with the PC. 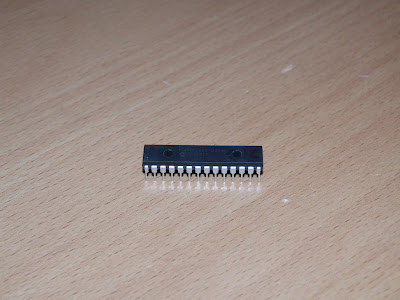 In respect to the display, instead of spending money on a new one, I found that I had a couple of HDLO-2416 originally manufactured by HP. I had these for years stored in a box, and finally found an interesting application for these. Each one has a 4-character dot-matrix, based on LED technology. Given its age (roughly 20 years) power consumption is not its best characteristic (modern LED's are more efficient). But as I didn't want to spend more money and was more interested in having a working prototype, I moved forward with this display solution. Additionally, the adoption of an exotic luminescent display sounded interesting, giving it somewhat of a vintage look (where the edge of looking for retro designs would be to use Nixie tubes :) ). 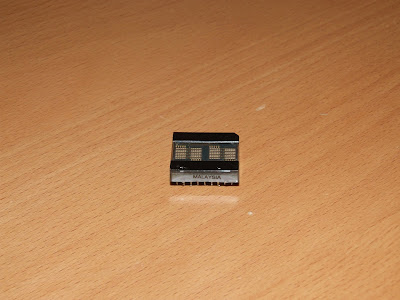 For the enclosure I went for the dirtiest, cheapest, easy to find solution. A simple plastic box used in household electrical installations: 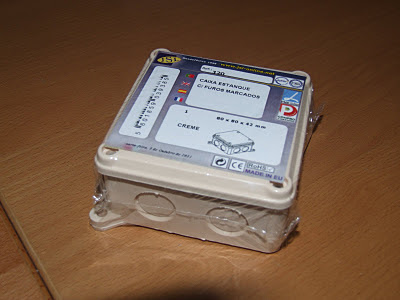 Aesthetical aspects aside, it would do the job, allowing all the components to be fitted inside with just about enough room to also acomodate the battery. 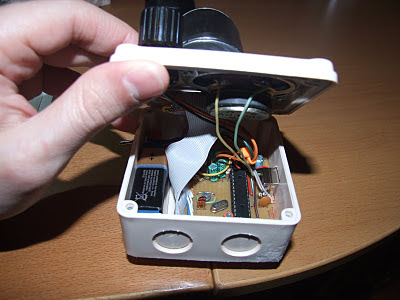 In the case of the Geiger tube, a regular can was used. Given its metal composition, it is well suited to provide electromagnetic shielding, preventing incorrect readings. 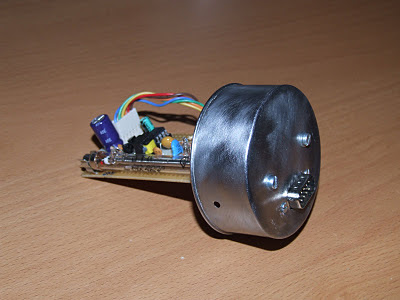 To finalize the description of the device, here is a video showing it during operation. It illustrates the implemented functions to date. These are the following:

The DOSE option is also visible in the video. It is just a placeholder for the future functionality, which will provide a measure of exposure to radiation in microSieverts/hour.

Future developments may include the implementation of a semiconductor probe, based on a photodiode or maybe a solar array shielded behind aluminium foil. While it is tipically
a challenge to use semiconductors to consistently detect single events, several key benefits exist, including the ability to quantitatively measure the energy of each particle and the
mechanical robustness, which is easier to be made higher than the Geiger tube.

In terms of overall battery consumption, figures aren't particularly exciting. On average we have about 110 mA of current drain from a 9 Volt batery. This gives about 4 hours of autonomy in the best case. Screen blanking is being performed after every 4 seconds of inactivity from the user or lack of events. Still with display blanked, consumption will not drop below 100 mA.One of the culprits is for sure the Geiger tube electronics.The HV power supply is completely unoptimized, given the fact that it was tweaked to reach the 400 Volts. Originally it would provide 300 Volts, having in this case a much lower consumption of about 8 mA (about 50 mA with 400 Volt output).

So some hardware improvements to provide better battery life are still expected, along with firmware changes that can also help increase battery life (e.g. change internal clock speed, better manage I2C communications and write operations to the display, dim the panel leds through PWM). So by carefully implementing these changes it is likely that an interesting drop in power consumption would be achieved.Comparing the current figures with those of a modern Geiger counter such as the Gamma-Scout (http://www.gammascout.com/), I would see my design as the pre-history of the low power consumption. Most of the models of this manufacturer have a battery life of 10 years. Typical power consumption is around 10 microamperes (!!) So trying to compete with these guys is out of question :)
at 10:26 AM