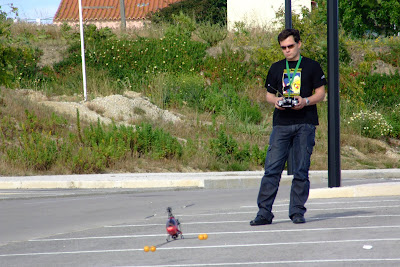 In my adventurous quest at being able to fly with my feet on the ground, I begin to understand the true fun of this hobby and how it stimulates the mind to understand the physics behind flight, and in the particular case of the helicopter how stable hovering and forward flight is possible.

Getting airborne (on a scale sort of way)

The ability to fly have been a long envied feature of birds. Since the early days of the history of mankind, there have been the ambition to fly like a bird. The same way the conquest for new lands and the seas have been seeked and achieved by people (both for political reasons and for the bare survival), the skies have also been one of the goals of humanity. While many have envisioned and prototyped flying machines (going back to the time of Leonardo Da Vinci), only during the the 20'th century this dream was fully achieved, with the Wright Brothers having created in 1903 the first controlled powered flight. The war effort strongly stimulated the development of this new, efficient way for people to move, control, watch and dominate the territories.