Getting airborne (on a scale sort of way)

The ability to fly have been a long envied feature of birds. Since the early days of the history of mankind, there have been the ambition to fly like a bird. The same way the conquest for new lands and the seas have been seeked and achieved by people (both for political reasons and for the bare survival), the skies have also been one of the goals of humanity. While many have envisioned and prototyped flying machines (going back to the time of Leonardo Da Vinci), only during the the 20'th century this dream was fully achieved, with the Wright Brothers having created in 1903 the first controlled powered flight. The war effort strongly stimulated the development of this new, efficient way for people to move, control, watch and dominate the territories.


Techonology envolved so fast during the 20th century that besides huge improvements having taken place with the airplanes and other flying vehicles, the industry also found feasibility and a market for flying machines that would not have useful functionality at sight. The combination of aeronautics with radio technology gave birth to products developed to fulfill the sheer fun of flight, but in a small scale, with the feet on the ground, safely behind a remote control.

While these small machines were great for people to better understand the dynamics of flight and how the control surfaces influence the behaviour of aircraft, still there was no solid purpose other than entertaining the model flight enthusiast.

Today, while model aviation is still present as a hobby crossing many different ages, its industry have also boosted the development of new ideas in the field of robotics. With complex computing machines becoming small and light, it becomes possible to put a lot of autonomous behavior on board of a model aircraft.

With the combination of techonologies in the form of packaged miniature devices, it becomes possible to have all the essential flight instruments in a small unmanned airplane or helicopter that can stabilize, fly by itself and follow a plan previously uploaded by the pilot.

A network of sensors allows useful information to be collected and transmitted in realtime, turning a unmanned aircraft into a potentially useful machine.

Conventional unmanned aircraft require the pilot to have visual contact with it, at a distance close enough do discern its attitude, heading, relative speed and altitude. The limited ability of the human vision to recognize these parameters, after some training make navigation from an external point of view possible. Training enables the human brain to acquire the ability to steer the aircraft the same way as if the person would be onboard the aircraft. The pilot have to mentally translate the action to be taken, into appropriate radio control input. The kind of input a person has to provide is conditional to the orientation of the airplane or helicopter relative to the individual. A trained pilot has all this reasoning mechanized in his brain, so that the response is immediate and he doesn't have to "think" about each control input. The timing is critical, and a unexpected delay most likely will cause a crash.

In the particular case of a remote controlled helicopter, input is particularly time critical. It is commonly said that "an helicopter is a machine that doesn't want to fly". In order to keep an helicopter hovering or in forward flight, constant pilot input is usually necessary, as model helicopters are inherently unstable (given its small weight, the lightest air turbulence will impact its stability, and the lightweight nature of the main rotor prevents the inertia from being strong enough to keep the helicopter level during a significant ammount of time).

Today some flight stabilization solutions designed for model aircraft exist and are available on the market for the enthusiasts of r/c airplanes and helicopters. Two main types of solutions exist:

The first solution is usually the cheapest (around 50 euros), being the second usually 6 to 10 times more expensive.

In my experience as a r/c flight enthusiast, I've decided to acquire a small (400 class) electric helicopter. I've chosen a Art-tech Falcon 3D. My budget was limited, and the offered functionality and degree of reliability seemed reasonable for the low price, so I decided to buy it.

At the beginning, given the lack of simulator experience I've failed to perform successful flights and soon made some expenses with new main rotor blades. While the training gear is helpful, it still doesn't prevent all of the crash situations. A bad choice of take-off space also makes things harder.

I've decided to play safe and get the stabilization gear: 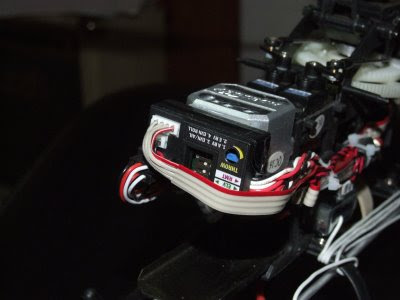 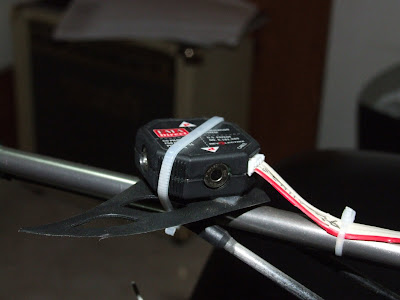 After acquiring some flight expertise I went for the acquisition of a flight camera: 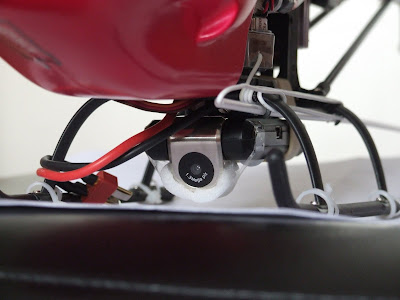 Here is a flight session with the onboard camera: