There was a time when it was not possible to obtain a proper pure sine wave inverter (12 V DC -> 220 VAC 50 Hz) without shelling out hundreds of Euros or USD.

Today, with the massification of supply and demand, and with the sheer scale of the chinese industry producing these types of devices for consumer and industrial applications, prices necessarily went down.

Until recently I had a modified sine wave inverter, which given its limited compatibility with different types of loads, I have discarded (resold) and went looking for a cheap pure sine wave (which intuitively I expected to be much cheaper in current days).

Through Aliexpress, I found a 500 Watt/1000 Watt peak for 38 Euros (roughly the price I paid for the modified sine wave model years ago - and it was only rated to 250 Watts): 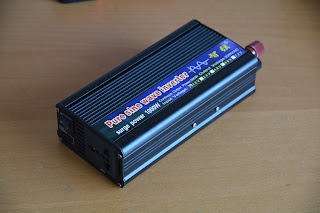 As for everything that satisfies the following 3 criteria:

I normally don't feel entirely comfortable with using products in these circumstances without running a teardown first, and looking closely if everything is put together properly, and according to a minimal set of safety rules.

Regarding the later criterion, it is not based on pure blind prejudice, but based on experience with products sourced by this market (especially the low cost ones tha  come without any type of warranty).

In this case, and because it involves some risk to humans (220 Volts output can be harmful/lethal), I decided open it up and see if everything was being done correctly.

The first thing I noticed was the lack of insulation in the mains socket wires (which provides the 220 Volts output) and in the power switch (which puts the inverter in standby): 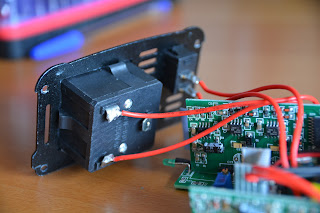 Also these wires did not have a very impressive section (even though at 500 Watts will only need to be rated for 3 Amps or so), so went on and replaced these with thicker wire, and insulated the terminals with heath shrink: 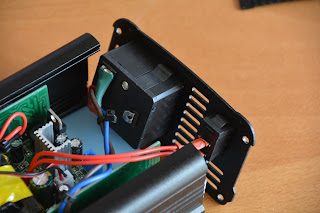 The second thing was tha back of the main PCB which did not seem to have taken any type of cleaning after the manual soldering that was probably done on top of the traces that carry the most current (the primary side of the inverter).

For this, had to spend some time flushing all the resin (or wathever substance) with isopropil alcohol from the back of the board, until it was properly clean.

The other thing was the lack of creepage distance between the two mains terminals in the PCB, which I fixed by drilling a gap between these: 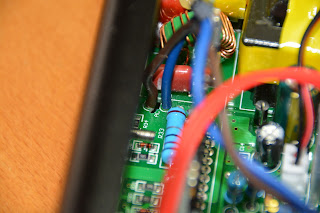 And finally, between the bottom of the PCB and the chassis (made of extruded aluminium and treated/anodized with a very thin layer of black paint) there wasn't any kind of insulation.

Added a plastic film to the chassis wall in order to improve insulation: 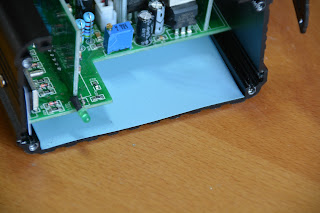 Apart from that could not find anything terribly wrong with the design. It would have certainly been more reassuring to see it more inspired in SMPS designs, with proper separation between "cold" and "hot" sides, and creepage distances being followed wherever possible.

It is true that even though the output voltage is high and harmful, it still is not at the same risk level as mains connected devices (where it is assumed that surges may occur). This may explain some tolerance factor here, or it is simply a domain that went forgotten and not properly regulated.

Regarding the components it was somewhat of a positive surprise to find brands such as Microchip, Texas Instruments or International Rectifier in the mix.

The PWM modulator (which modulates the 50 Hz sine wave for the output) seems to be properly implemented in a nice separate module controlled by a Microchip PIC16F716: 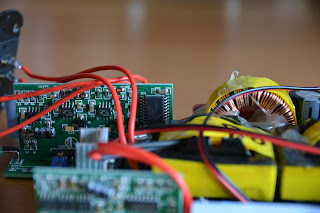 The output H-Bridge is made of four FHP13N50 high voltage MOSFETs: 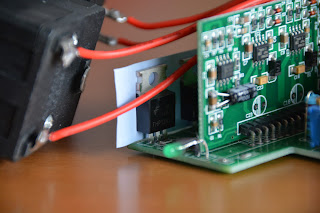 And on the input side we have four FHP3205 high current MOSFETs: 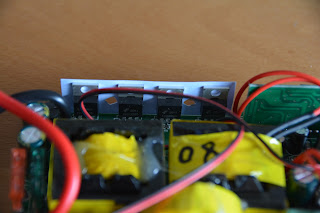 All in all it is not a bad package if it weren't for these "small" details. This adds to the observation that many chinese products are "almost good", suggesting that some oversight (or deliberate gaps) seem to exist in the production line of these products. 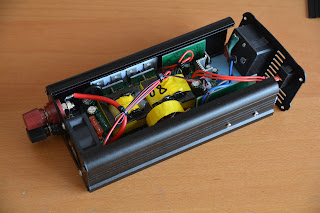 An equipped consumer like myself will grab a product in these conditions, and perform an after-market treatment to render the product safe to use or reliable.