This simple apparatus is a particularly interesting way of demonstrating the principle behind the common household dehumidifier: 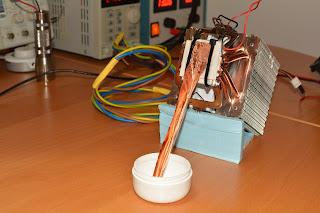 The big difference however, lies in the way the low temperature (required for the condensation of the water vapour) is achieved.

A regular dehumidifier works in a similar way to a refrigerator or consumer air conditioning system:
a coolant substance (usually HFC-134a) flows in a closed loop. This coolant cycles between the liquid and gaseous states. The cold section of the device is called evaporator - and is basically a heat exchanger that captures the heat from the environment and uses it to evaporate the coolant. Once in the vapor state, the coolant enters a compressor where its pressure and temperature increases. This heat is then released through another heat exchanger called condenser. As the temperature is decreased but the pressure remains the same, the vapor condenses, turning the coolant into a liquid.
As this cycle repeats the intended purposed of the system is achieved: moving heat from one surface to another.

In the peltier device, the same effect is achieved, but instead of mechanical parts and a coolant, a semiconductor junction is used. When properly designed, a PN junction is capable of moving heat in a single direction, depending on the direction in which the current flows.

The principle of the dehumidifier is simple: the air from the environment is pushed against the cold surface of the evaporator (or the cold side of the peltier) causing the water vapor to condense into droplets of water. These droplets are captured and stored in a reservoir. The same airflow is used to cool down the condenser, which is normally adjacent to the evaporator.

While interesting for demonstration of the principle, the peltier device is far from being the most efficient approach for this purpose. The overall efficiency is very low compared to conventional compressor technology, and the material cost for producing comparable refrigeration capacity is very high. 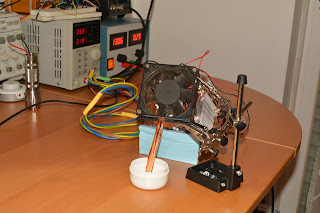