Before the Internet, anyone willing to independently obtain satellite imagery from the source would need to buy expensive equipment capable of decoding the analog slow scan video images transmitted by weather satellites  such as the NOAA APT ones. Today there are four of these NOAA satellites still operational, the NOAA-18, 17, 15 and 19. All of these are sun-synchronous satellites, which means these orbit the earth at around 800 Km of altitude and cross every latitude at approximately the same mean local solar time for each pass. This kind of orbit is useful because of the consistent illumination (by the sun) of the target upon each pass.


I have recently bought a DVB-T USB stick named "Ezcap". This receiver cost me a little over 10 Euros, shipping included. Not long ago some people realized this device was actually a part of a SDR (Software Defined Radio), where the demodulation and decoding of the TV signal is actually performed by the host PC. With a tunable bandwidth in the range of approximately 22 to 1200 MHz this makes it a very interesting wide band receiver device: 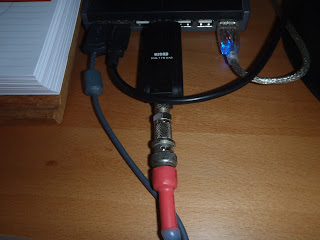 The SDR community took the very useful task of integrating this device to existing SDR tools that work with other hardware devices such as the USRP (Universal Software Radio Periferal).

Currently there are applications such as SDR#, HDSDR, gqrx among others, which are capable of using this USB dongle as a software radio device: 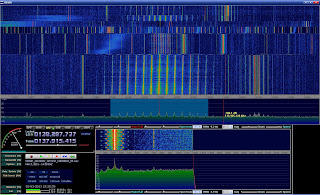 I have personally been experimenting with some of these applications for the reception of several kinds of transmissions. In general I have been very well impressed by being able to receive and decode HAM radio, CB, WFM Stereo radio (88-108 MHz, RDS decoding included), Aviation band, 2-meters HAM (also APRS packets decoding), and also digital DMR transmission (thanks to the DSD tool - see http://wiki.radioreference.com/index.php/Digital_Speech_Decoder_(software_package)).

More recently, while scanning in the 137 MHz band, I found a relatively wideband signal that seemed likely to be from a weather satellite. Initially I was a bit scheptical because I was using a simple vertical antenna optimized for the aviation band (108-137 MHz), that I though it wouldn't be enough to barely detect the carrier signal of one such transmission.

To my surprise, I compared the demodulated signal (WFM demod.) with a sample transmission obtained from the web, and both had identical patterns, such as for example the characteristic 2400 Hz subcarrier. After a bit of fiddling around with the appropriate audio format (which I later realized it had to be resampled to 11 Khz/16 bit), to my surprise I managed to obtain a picture through the WXtoImg application. As I could not capture the complete transmission (only about 3 minutes), and the signal started to fade away at the end, I could not obtain a full picture, but still the result was well above my expectations, given the fact that there was ZERO effort dedicated to prepare the hardware to receive this transmission:

The picture show is the raw data containing the two sensor channels of the satellite. Normally the two wavelengths of these frames can be combined to provide a false color image that is easier for the meorologist to analyse. One such example is the picture below:

With these results, I might think of improving the reception by building a more adequate antenna such as the quadrifilar helix antenna (e.g. http://www.digitalham.co.uk/weather/equipment/quadrifilar-helix/).