My first and accidental attempt at receiving images from a weather satellite was surprisingly very succesful. However as I only started capturing the RF signal late in the satellite pass, it was only possible to retrieve a small portion of the transmitted image.


For this second attempt I took ephemeris data to predict a next pass with the satellite passing as overhead as possible. As such I aimed at receiving from the NOAA 18 satellite that did its pass at 04:11 GMT.

I programmed HDSDR to start recording about 1 MHz of RF between approximately 137 and 138 MHz for about 17 minutes, in order to give a confortable margin to cover the satellite pass.

To my surprise (and initial confusion) I found that in the recording there were two distinct signals with the pattern of the APT transmissions, in practically opposite positions of the spectrum portion of the recording:

At first I thought this could be image artifacts of the receiver, but by better looking at the ephemeris I found that NOAA 19 would also pass nearby at the same time, but with a much smaller maximum elevation of 15º.

I decoded the small fragment of signal for this satellite (at about 137.100 MHz), and still managed to obtain this segment:

Next I "offline" tuned to the other signal at 137.915 MHz, recorded the audio, resampled to 11 KHz and fed it to WXtoImg, and obtained a much more interesting result:

Still this picture is about 400 lines shorter than the full transmitted frame. Anyway, given my antenna setup I am still surprised that the results were so good. Besides being a regular vertical antenna, it is mounted in one side of my building, in practice only being exposed to less than half of the sky, the other side being blocked by the building itself. During much of the satellite pass I could not receive a detectable signal, in particular during half of its N-S flight direction.

Interestingly, given the full spectrum recording of the signal, by analysing the doppler shift it becomes very clear what portion of the flight I was able to receive. We know that the frequency increases as the satellite moves towards us, and decreases as it moves away from us. As I could see from the plot a initially flat curve followed by a smooth drop in frequency, it is obvious that I only caught the part of the flight in which the satellite moves away from my location: 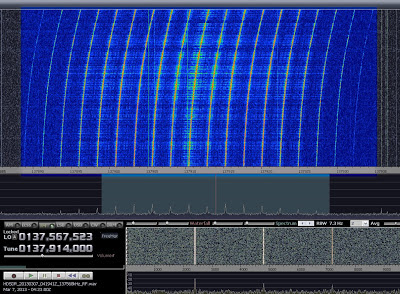 So this tells me that at least in theory, if I could raise the antenna above the building in order to get full sky coverage, I should be able to receive a complete transmission (perhaps with a slight ammount of degradation in the edges). And this not to speak of a helical polarization antenna with a reasonably good gain..

Below a few more pictures of the capture using the various filters from WxtoImg: 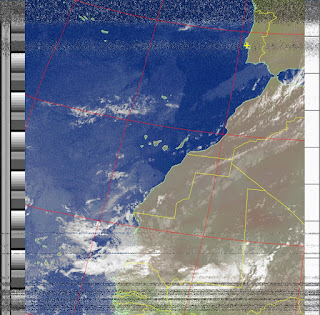 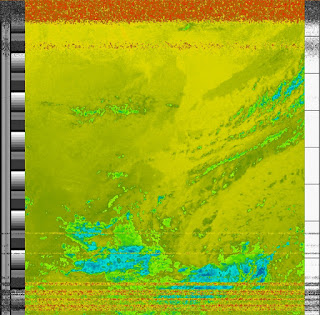