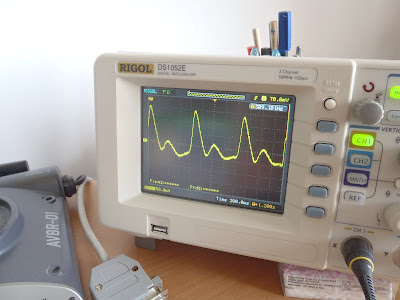 Among the most basic forms of biometric data we may collect from ourselves is the heart beat.Wether to control our body response to sports activities, keep track of our health or to observe involuntary response to external interaction, this is one of the important parameters that is collected by physicians, and specialists of a multitude of health-related areas. What I am describing in this post is just the implementation of one of simplest forms of obtaining a waveform that represents the heart beat of an individual.


The human heart beat can potentially be collected through numerous different methods. Among these we can identify the following:
Each method has its advantages and disadvantages, and the context where the heart beat is to be collected will ultimately define the selection of the best method.

The optical method, the one I am describing here is one of the simplest, and offers a very good level of reliability.It is also simple to implement and doesn't require exotic hardware. It relies on the combined use of an infrared diode and phototransistor or photodiode. These are mounted on the user finger (tipically the left or right index finger), and taking advantage of the moderate transparency of the finger to IR and visible light, the variation in the light that is absorbed or reflected (depending on how the emmiter and sensor are mounted around the finger) will relate to pace of the blood flowing in the vessels, and as such this will provide a signal clearly indicating the heart beat. The electronics to pickup the signal are simple, as the amplitude obtained is high enough, and there is also no significant source of noise.

The electrical method is simple in concept, but involves more complicated signal detection and conditioning. The heart muscle is triggered by electric signals. At the muscle tissues these signals are intense enough for the heart function to be accomplished. But at the skin level, these signals are extremely weak because of the thick layer of organs and tissues that separate the heart from the skin. As such special instrumentation amplifiers, capable of magnifying signals in the order of microvolts are necessary. Besides amplifying signals it is also necessary to attenuate or entirely reject spurious signals (some of greater amplitude than the desired signal) that affect the detection. Normally band bass filters are added, but one important technique consists of using common mode noise rejection. Adding electrodes in other parts of the body, and electronically cancelling the signals that are common to all electrodes, efficiently allows the heart beat pulse to be isolated. The cancellation process can either be acomplished through analog circuits or using digital signal processors.

The ultrassound doppler method is commonly used to acquire the fetal heart beat, but can also be used to directly detect the patient heart beat.Like other structures in the body, the blood reflects part of the energy of the pulses transmitted by an ultrassound probe. As blood flows inside a vessel, it produces a distortion in the reflected signal, or a shift in the frequency. This is the doppler effect. By continuously measuring this shift, as the blood travels at speeds that vary with the heart cycle, so does the shift, producing a direct indication of the heart beat. This method is available both in dedicated equipment (in a doppler monitor or in a CTG instrument), or as an extra feature in a ultrassound scanner.The later is tipically capable of producing an audible representation of the heartbeat, and provide more detailed information such as flow direction and volume for a particular blood vessel (vein or artery).

The audible acoustic method is just the direct hearing (e.g. through a stethoscope) or through a microphone and amplifier.

Below is the prototype implementation of the first method. I have used an infrared diode (the one in the top of the finger), and a phototransistor as the sensing element. In this case a CNY70 was used as the phototransistor element. It also features a built-in infrared diode, but using it did not produced measurable results (direct pickup of emmited light completely overwhelms the sensor). 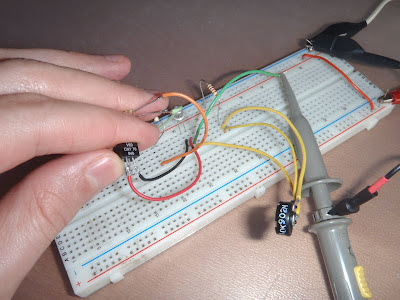 Below is the waveform that is obtained at the output of the circuit. It accurately reflects my heartbeat at the moment of the test (around 75 bpm).