After a few months of posting abstinence here are some fresh new things to show this summer. The android application has been dramatically improved with new features and better visual layout. Additionally a portable video screen have been build, in this case sporting a 4.3" tft panel, a 1.2 GHz analog video receiver (originally used in a fixed manner), a LiPo battery, and a custom made battery voltage warning circuit (yes, LiPo batteries are particularly susceptible to damage under deep discharge situations).

What this video shows is the control console for steering the amiro autonomous rover.
It is made up by a color video receiver, and the control and telemetry module, which in this case is implemented on top of an android phone. The phone communicates via wifi with the drone, sending driving commands, and receiving status information and telemetry from sensors and other parameters. We can manually steer the car, control the throttle and pan the camera about its horizontal and vertical axis. We can also control the lighting, by varying the slider, which will give us either visible or infrared light.

The white projected square on the left side of the image is from one the infrared sensors used to determine obstacle distance. In the current version of the software, these are only being used for showing the user the distance of the obstacle to which is pointing. In future versions of amiro it is expected that these, together with the sonar sensor will be used for preventing collisions on erroneous user input.

The range of the car is limited to the wifi maximum distance, which in open space is roughly 100 meters.

The video transmitter, while operating in the 1.2 GHz band has a similar range.

The android application displays in realtime the telemetry data. It includes:

The interface also enables the distance counter to be reset on demand, and the steering to be trimmed. 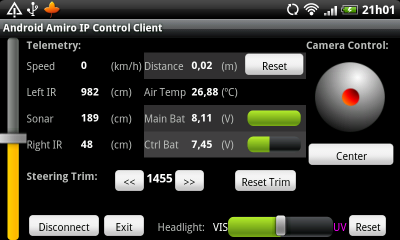