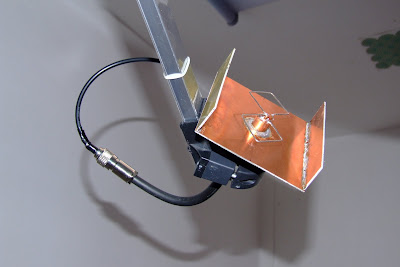 Instead of using the SMC repeater I've used before, I decided to get my hands on two foneras with a fresh new version of OpenWRT and do a slighlty different setup: one of the devices would connect as client to the remote network, having the dish antenna attached to it. The second device, linked to the first through the Ethernet port, would be configured as Access Point and provide DHCP to the clients on the local WiFi network. The first fonera could additionally do NAT and have a few firewall features activated. 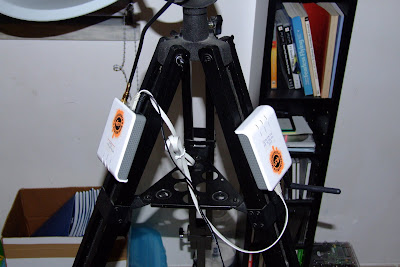 So far the efficiency tests have not revealed far superior results, most likely because of the low quality coaxial cable (RG-58) used for the connection between the antenna and the fonera.


This type of design could be ideal for building small weather stations where power is a significant constraint and some data needs to be periodically transmitted. Other application could be for surveillance cameras where the location of the camera could turn impratical the use of a wired link.