Water Fuel Cell - cleaning the mess and repairing the electrolyser

After yesterday's mishap, and of realizing how lucky I was to still be in one piece, it is time to take a deep breath and after looking into what went wrong, follow all the safety measures to prevent one such event from ever happening again.

I started by getting a new lid for the electrolyser and putting a new seal rubber in it, this time with two clamps instead of one. Now only the clamps are used for holding the lid. The original ring around the lid was discarded. By itself this doesn't provide extra protection against an explosion, apart from the slight probability of the lid popping out in one piece instead of fragmenting into several pieces (today I still found fragments of the lid in distant corners of the room).


Considering that there is not much to be done in therms of safety with the electrolyser itself, I am starting to employ more effort in building two cascaded bubblers, with two main features: be long enough to maximize the distance between gas input and output (allowing for a large water barrier in case of a back-flash) and each bubbler be made from a material which will not fragment into many pieces in case of an explosion, or the lid be allowed to pop-off in this case. The major problem with the electrolyser lid lies in its acrylic nature, which when broken will fragment into many sharp pieces. When propagating at the speed of sound these fragments will cause damage to whatever is in the way.

Here is a picture of the refurbished electrolyser: 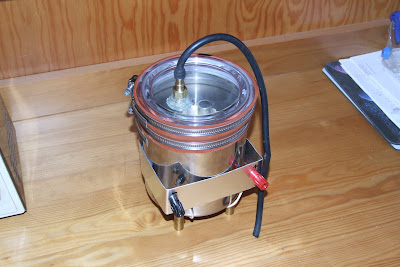 Safety goggles is also an extremely important item to wear during the elecrolyser operation: 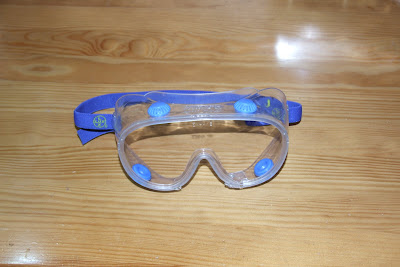 Supersonic fragments will most certainly rip an eye off, in case you be in the path of the explosion.
at 1:59 PM

Keep up the good work.