While the air leak problem have not yet been solved, other problems are now fixed, and some improvements have been made. The control circuit have been verified, and it was found that the 7805 regulator that was being used, didn't had the GND pin connected (oops, minor mishap). In spite of that the two 555 timers would work, as the regulator would let the input voltage pass through. The output signals were not however perfect square waves. As the GND was hooked up, the MOSFET would no longer switch from cutoff (the 4 volts output from the second 555 would not be enough to activate the transistor). So the 7805 was replaced by a 78L09 and the circuit started performing normally, delivering a clean signal to the cell and smaller heat buildup in the MOSFET.


Another change was the addition of a small piezoelectric speaker to the container of the cell. This causes the soundwaves to propagate inside the water, eventually contributing to frequency stimulated breakdown of the water molecule. At a later point comparative results from using and not using this element will be analised in order to assess if it plays a role in turning the electrolysis process more efficient.

The speaker is connected in parallel with the load (the Water Fuel Cell), and it can be heard while at audible frequencies: 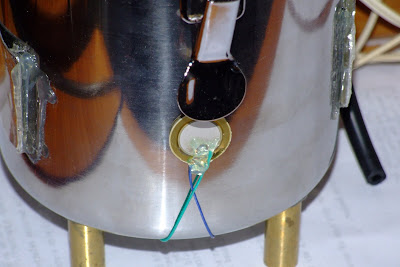