Water - alternate fuel source and a panacea for mankind?

When it comes the time to pay after filling up the tank, you dearly wish your car could run on anything cheaper than stinky old gasoline (or diesel). Wouldn't an entire global economy depend on this precious product, and you could establish a parallel with other things like drugs, where the desperate sense of necessity leads to the unavoidable obligation of paying a large sum of money just to obtain a given ammount of it.


It's a sad fact, however, that in this business the whole world is an addict, and just like with a junky, the side effects of this condition are starting to show up.

And where drugs exist, dealers, cartels, entire webs of traffic make up the building blocks of this entire business. In the oil world, the same entities exist, with different names and covered in the umbrella of legitimacy.

If it wouldn't be legal the entire world would stop: people could not run their cars to go to work, airplanes wouldn't take off, ships could not carry goods across oceans, and so on.

Now imagine a world like ours, where oil dependency would have seriously compromised the health and survival of its population, by letting polluant agents released by oil combustion damage and destroy the existing natural resources. Until one day a man finds that using a not very complicated process, water could be splitted in hydrogen and oxygen, just like with electrolysis, but requiring a very small ammount of energy in an equation where the profit margin, i.e.: the hydrogen obtained in return, would be many times greater than the energy spent in the process. With this invention this man would have killed the oil industry, simply because 70% of the earth's crust is covered by water, whereas oil certainly only makes up a tiny fraction of this value, and falling. And as if this wouldn't be enough, instead of the many toxic gases released by the conventional fuel combustion, hydrogen combustion only releases...water vapour. But the oil industry could not disappear. The relationship between oil companies and governments, and ultimately between governments and other nations would be complex, and oil would be the glue holding things together. And like with so many other things in life there would be a consistency that we wish we would not see: the nations holding the greatest share this product would happen to be those with the greatest deal of conflicts, internal, or with the rest of the world.

Oil could well be the only narrow stream of understanding, or the very reason why they could have the arrogancy of turning against the entire western world. In one way or another making oil obsolete would not leave the world serene like with any other useless invention. Liken anyone or anything threatening a multi-billion dollar industry there would have to be a price to pay, or a long fight before this miracle of mankind could see the light of day. In this hypothetic world, the mastermind behind the magic key to salvation would no longer sleep at night with the same serenity as before. And not without reason. After all the entire nation would watch his steps, and secretly conspire against his existence, in an attempt to suppress any threath against the value of oil in the global economy, where his country would have a lot to benefit from. But as a self ensured man he would be, nothing prevented him from patenting his invention, and going ahead with his plans. Indifferent to any declared threats, went ahead with his plans, convincing investors to finance his project. One day, the man shows dead. Forensic diagnosis declares the cause of death as natural and no murder hypothesis is put on the table. The man was healthy, without
record of health issues. However no other option is considered, and investigation finishes short after the occurence.

What about if I told you this world is the real world we are living in, and that this man in fact existed, and was called Stanley Meyer? You probably wouldn't believe the story, like many scientists don't and I personally am scheptical about believing it entirely. It's not because the world is sick (because it is) nor because brilliant inventors are persecuted until they give up on their findings (if there is an unofficial yet governamental inconvenience that the invention be successful, they are persecuted), or because this would be a brilliant solution to stop the pollution caused by oil (as it would), but because it seems a bit farfetched as with simple technology a single person would be capable of doing better then what years of research and development from the automotive industry haven't achieved. Without mentioning that this would be in violation of the laws of physics currently accepted.

However, giving the benefit of doubt and following the enthusiasm driven by the fact that quite a considerable amount of people claim to have already surpassed the laws of Faraday with their homebrew apparatus (by producing several times more hydrogen than would be expected from the energy that is put into the system), I decided to pick up the patent from Stanley Meyer, and attempt to build the device myself, in order to be able to see with my own eyes if there is a confirmation of this idea, or if instead this is no more than a hoax or product of a urban myth, grown in the mind of this complex person.

So here are a few images of the unfinished prototype, which include the control device, wich powers the electrolysis cell with a pulsed current (this includes variable frequency, duty cicle, and variable gate frequency and duty cycle), and a glass flask for single cell cell test run (the definitive design will be put inside a larger stainless steel container with a set of 6 cells, and capacity for a total of 9 cells): 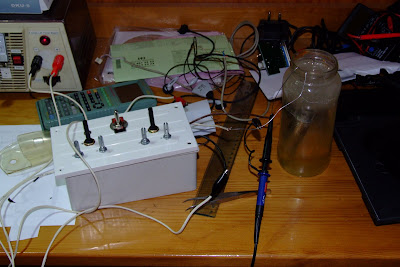 Each cell is made of two stainless steel tubes (304 grade), arranged in a coaxial configuration where the inner tube (15 mm in diameter) and the outer tube (18 mm) and spaced by approximately 1 mm. This 1 mm thick region is where the electric field is formed, and where the water splitting process takes place. 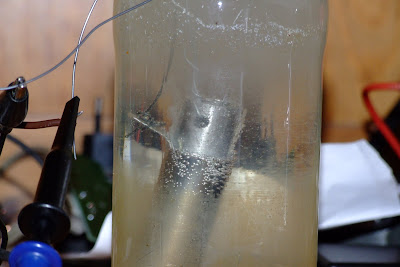 Signal applied to the cell: 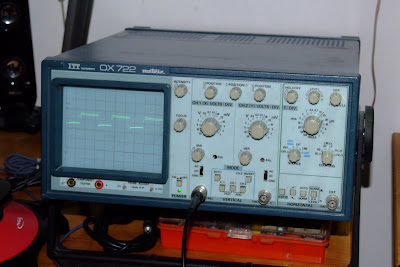