I start this blog with a great, not so new idea that I decided to reimplement and see working with my own eyes. The principles behind it are not new at all and go back to the early days of RADAR technology (1930's), in a time where microwave radio research was taking place to improve the accuracy of this type of equipment. The need for guiding radio waves through a low loss medium and to be able to selectively pickup signals coming from a particular direction (in this case echoes from the emitted pulses) led to the design of different types of microwave antennas. These antennas had to be both compact (in order to fit into small airplane compartments) and efficient (output most of the signal from the transmitter in a particular direction and receive with exceptional gain the signal returning from that same direction).


At the time, these technologies were mostly closed under military secrecy, both because there was no justified civilian application for it and because of the war context in which these researches were taking place.

Later, microwave radio applications became widespread, both in civilian aviation, weather forecast, telecommunications and in the domestic life - microwave ovens. Necessarily most of the products of these early researches became public, including the antenna designs.

Today we are buried in microwave technology: ovens, satellite TV, GPS, GSM/UMTS/CDMA cell phones, DECT phones, garage door openers, Bluetooth, WLAN. All of these technologies have the particular feature of transmitting and/or receiving signals at small or very small radio wavelenghts - WLAN for example, transmits signals at a wavelength of about 12,4 cm. Comparatively the radio signal from an FM radio has a wavelength of 277.59 cm.

This means that a microwave antenna to be efficient doesn't have to be huge, like it would happen with FM radio antenna.

With microwaves, a moderately low power directed signal can travel a long distance and be detected at the other end with a compact antenna, as long as it is accurately pointed towards the emitting station. Thanks to this, a user with a satellite TV antenna can pickup a signal coming from a satellite 36000 km away that is transmitting only 70 watts of power (about as much as regular light bulb) with exceptional quality. Comparatively ground TV UHF transmitters require several hundreds of thousands of watts for a few hudreds of km of coverage (a moderately muscled car produces about 100 kw of power). So we could compare the costs of a UHF transmitting station with the fuel consumption of a few sports cars running together 24 h/day at top speed.

In spite of low energy consumption and very large signal coverage, transmission sattelites are of course, not cheap to deploy and maintain.

But, for us in our domestic endeavours, some things can come cheap in microwave technologies. WLAN is already common place everywhere, being a very convenient way of bringing network connectivity to computers and other devices, where mounting cables might be impractical and expensive. The performance of this type of LAN thechnology have also improved over time, so that in many cases is an interesting replacement to regular wired LAN technology.

Even though WLAN is very interesting as a local network technology, it becomes even more interesting if we take the challenge of making it a little less local. This is where the radio antenna principles from the 1930's come into place. Regular WLAN hardware, such as Access Points, Client adaptors, Routers and Repeaters all have small omnidirectional antennas with a gain rarely exceeding 2 dB. Most of these devices however, provide an RP-SMA plug, allowing the user to upgrade to a better antenna. But, by searching the market for alternate antennas, we see that these are in general expensive, sometimes too expensive for the expected benefit - for example a Linksys HGA7S with an announced gain of 7 dB, can cost up to 65 €. This is above the price of many AP's and client adapters.

The challenge I've decided to undertake was to build a much better solution for a much lower cost. This tourned out easier than otherwise expected.

Based on several information about antenna construction found online, two equal waveguide antennas were built, using common materials. The total cost with materials did not exceed 30 €, and the resulting antenna set had an expected gain between 10 and 12 dB. A few objects such as the tripod and the tin cans were reused, representing a null cost. The most expensive parts were the alluminium foil and the coaxial connectors used. The RG-58 cable was not expensive but the choice was not optimal. LMR-200 cable would have been a better choice, as it features smaller insertion loss in the 2.4 GHz band. As the length of the cable is small (1 m) in this case the impact is not very substancial.

The "cantennas" were attached to a tripod from a telescope, even though a regular camera tripod could be used with this design (A 12 € tripod from a chinese store should do the trick): 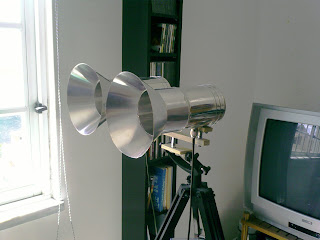 Using small wood ribbons, four platforms were made in order to support the antennas and allow individual azimuth adjustment: 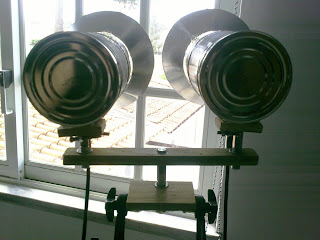 These were fixated simply with nuts, bolts and washers. Hot glue was used for the nuts that hold to the telescope tripod. If the antennas were to be attached to a regular camera tripod, the platform at the bottom could be discarded, as the nut would directly fit into the tripod screw.

Copper wire was used for fastening each can to each individual wooden support. Other materials can also be used as long as these provide adequate grip for the can. 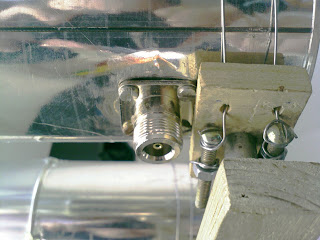 The 31 mm antenna header as mounted in each antenna, soldered directly to the N-type connector. This value should be measured from the connector insulator to the top of the wire. It is best to cut the wire above the required length and after it is soldered to the connector the size be adjusted to the required 31 mm: 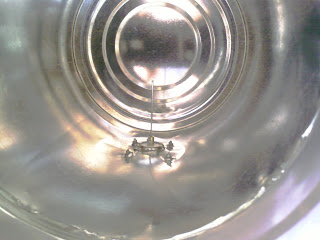 For improving the can performance, some aluminium foil was used to extend its length to 185 mm. Additionally alluminium funnels were added to each antenna. These provide about 3 dB extra gain to each one. Both the aluminium cillinders and funnels were hot glued to the cans: 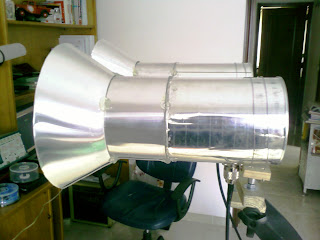 In my prototype, I found convenient a Wireless Repeater. This model (an SMC WEBT-G) only had one RP-SMA connector, so I added a new one and removed the internal butterfly antenna: 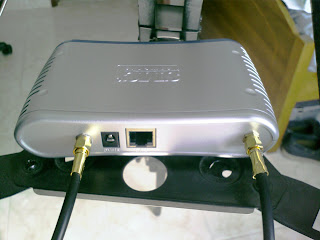 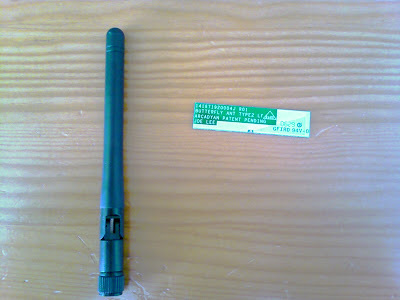 From the limited tests performed so far, the results seem exceptional from the point of view of a person who never played with antennas better than 2 dB of gain. Aiming the antena to a block of buildings roughly 200 m away with several obstacles in the path provided 45 % of signal strength for some of the AP's located at those buildings. Given the fact that there is no line of sight path between stations, it is quite a satisfactory achievement.

In a later iteration more tests are expected to be executed, including range tests in a line of sight path between two antennas of the same type. Other people having built this type of antenna have reported to achieve a link between stations 3 km apart, without any kind of amplification (just the 100 mW or less of output power from the AP/client adapter).