Another weekend have passed, and along with it a few more results as I slowly but steadily walk towards completion of the project. The digital voltmeter/ammeter displays have still not arrived from China. This is the last piece of hardware missing. Adding time to the equation and all the elements necessary to complete the project are available.


This time I focused on the power handling parts. This meant populating the heatsink with transistors and the bridge rectifier and prepare all the connections between the components in this module. I had two problems: where to put the majority of power resistors used in the PSU, and how to keep the connections from the heatsink components simple.In the heatsink there would have to be quite a few components: the four 2N3055 power transistors, the KSA940 driver transistor, the bridger rectifier, the LM35 temperature sensor and the fan. Connecting all these things to the main board would mean a lot of wires crossing the enclosure. Also, it could be hard to avoid the proximity between power resistors and components that degrade with heat, such as the electrolytic capacitors.

As such I decided to build a support PCB, designed to convey the connections from the power transistors, and to hold some components such as the four 5 Watts resistors which are placed in series with the output of each transistor. The bleed resistor of the main filter caps will also be soldered in this PCB. 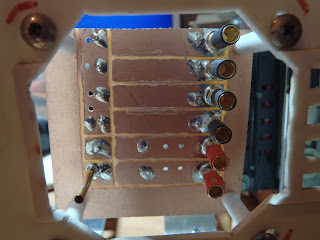 Through this approach, the only components using the main power rail be the filter capacitors (the two big 10 000uF ones). This simplifies the construction of the main board, and avoids potential problems and extra effort to ensure high current handling in a perforated veroboard. 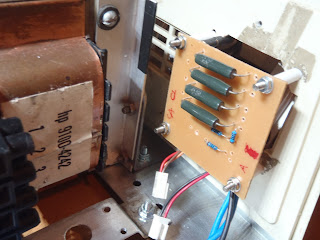 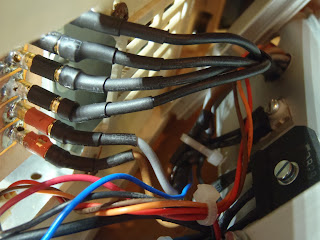 The heatsink block was completed with the attachment of all the semiconductors: the four 2N3055 transistors in the front, and the bridge rectifier and driver transistor (KSA940) in the back: 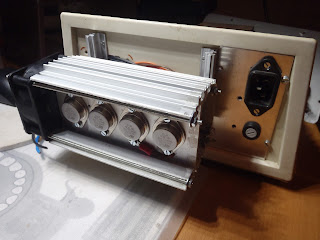 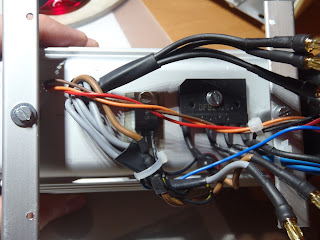 The next step will be to finish this support PCB with the bleed resistor, add some connectors, and start working on the main board. For this I expect to start by placing the main board components in a breadboard and perform some tests first with the input being supplied by a current limited power supply. After satisfactory results are obtained, I will then start assembling the main board.
at 3:45 PM