The parts from Mouser have arrived (was pretty quick..wouldn't the shipment have been taken care of by FedEx): 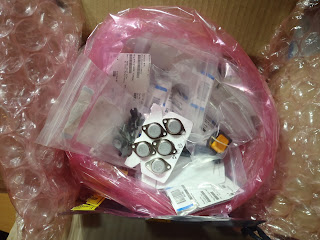 I couldn't resist at least grabbing some of the panel parts to get a partial preview on how the front panel will look like: 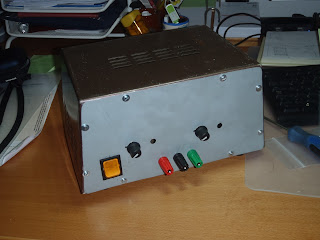 I had do to some minor trimming of the width of the power switch slot. I also added a 3 mm hole for each of the pots holes, to fit the tiny poles in each potentiometer, used to prevent rotation of the pot body: 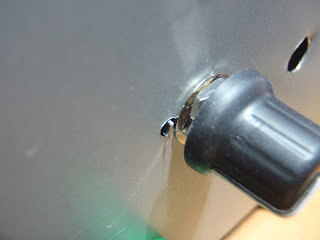 This work still has to be done for the remaining pots.

The bulky 2N3055 NPN power transistors, four of which will be used on the power supply: 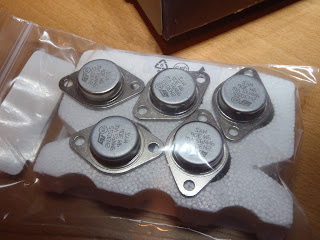 And also the two large 10 000 uF 63 V capacitors which will compose the main DC filtering before the regulator section: 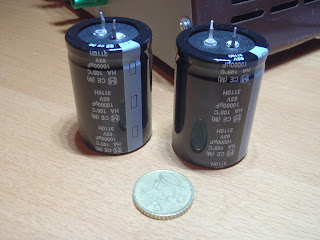 Another thing I started working on during the weekend was the control circuit for the fan. The idea is to vary the speed of the fan depending on the temperature of the heatsink near the power transistors, and to totally stop it below a certain temperature (i.e. 35 degrees C). As I wanted to vary the speed efficiently, I thought of using PWM. As I had some PIC12F683's lying around, I thought of programming the intentend behaviour into its firmware. In the breadboard the result was successfull, and I will add it to the main power supply circuit schematic: 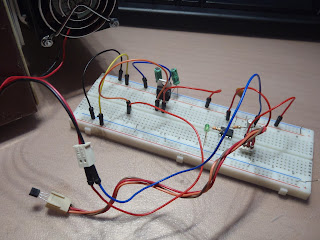 For probing the temperature I have used a LM35 (shown attached to the 3 wire cable), which is a temperature sensor that delivers a analog voltage proportional to the temperature (10 mV per ºC). For the final circuit I will instead use the TO-220 package version of this sensor chip as it's easier to couple with the heatsink because of its metal plate.

Once completely drawn, I expect to post a full schematic of the power supply.