Booster circuitry up and running

Running digital equipment has the drawback of requiring tight voltage ranges in order to operate. In the case of my robot, I had the need for powering the Fonera 2100 from a pack of 4 AA batteries. While the batteries can deliver 4.8 Volts once fully charged (which is barely sufficient to power this wireless appliance directly), once the voltage drops further, the Fonera ceasses to operate. In this situation the batteries still have remaining energy that is not possible to use.


This type of problem calls for a voltage booster or charge pump device. These prodigious devices can take a given input voltage, and produce an output voltage that
can be lower, equal, or greater than the input voltage. They can even behave like voltage regulators, ensuring a steady output voltage.

I have chosen a simple to install voltage booster, already assembled in a tiny PCB. I went for the Pololu Adjustable Boost Regulator: 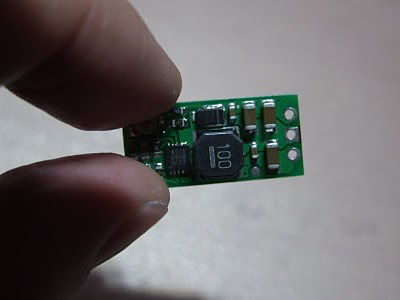 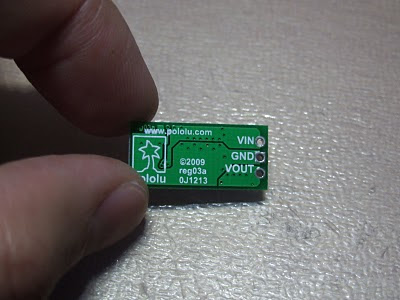 This device is based on a Semtech SC4501 (2 Amp, 2 MHz Boost Switching Regulator with Soft-Start).It can accept an input voltage between 1.5 and 16 Volts, and produce an adjustable output (via a potentiometer) between 2.5 and 9.5 Volts. With the average output currents of the Fonera of 0.5 A, this booster operates at around 80% efficiency.

While testing the device, I had the "surprise" of verifying that the input current once the fonera had completely booted, had raised to 2.1 Amps.
Without reading the input voltage, I was confused because the Fonera would only draw a maximum of 1 Amp. Then I checked the voltage at the battery pack, and these were measuring 3.3 Volts (without load these would normally be steady at around 4.8 Volts). The Booster output voltage was a steady 6.5 Volts like initially adjusted without load. With this I realized the booster was actually doing its job right, making it's best to maintain the output voltage constant. The batteries on the other hand were nearly depleted. This had the consequence of demanding massive input currents to compensate for the voltage drop. The 2 Amp limit of the booster means that in these circumstances the booster can barely handle the load. Fortunately this is the borderline case, to which the booster is only exposed for a small ammount of time (after this the batteries can be declared dead and must be replaced). On the other hand this booster has a thermal shutdown and current limiting feature, protecting the hardware from damage.

As a curiosity on charge pumps and ultracapacitors, here is a link to an interesting 9 Volt battery based on a 2.3 Volt ultracapacitor: