Ion motors are very cool stuff. So cool that Nasa decided to invest research effort in this subject since the early 1960's when the physicist Harold R. Kaufman achieved the first design. In spite of the small ammount of thrust (when compared to conventional rockets), ion motors are capable of a very large exhaust speed, being equivalent to ten times the exhaust speed of a high quality rocket (the later can only achieve between 3-4 km/s). This means that ion motors are capable of continuously accellerating an object up to the exhaust speed (considering the space environment, where drag is practically absent). The time for exhaust speed to be reached depend of the mass being moved.


Even though a full size ion motor is large, complex and will only work efficiently in a vacuum environment, we are able to get a glimpse of the ion propulsion without spending too much money. With a simple high frequency HV power supply (can be built from a CRT television flyback transformer) we are able to provide the power for the ion motor, which in essence is just a ground plane (made of aluminium foil), a paper disk, and a copper wire frame (shaped as a cross with the tips bent in the same direction). This is placed on top of a base structure, through a pin pointing upwards, which maintains the paper disk standing with the least possible drag.

The disk is connected to the HV output of the transformer. In the particular design that is shown on the video, the frequency of the HV signal is of about 94 KHz. The voltage is estimated to be around 15 KV between the positive and the ground plane. An exact measure could not be obtained, as a device capable of reading in this voltage range was not available. However a spark will form when a gap of around 15 mm is reached. This allows us the obtain the indicated estimate.

In the video we see that the disk will slowly spin up until it reaches its terminal velocity. In a vacuum environment it would continue to spin up until the drag at the joint would become the limiting factor. However this particular design would not work at all because it depends on the air to produce the ions that are necessary for the propulsion. The ion motor designed by Nasa has its own source of propellant gas for ion production.


In the following photo you can see the ion spray coming out of the pin. A large spurious excursion can be seen at the bottom of the pin: 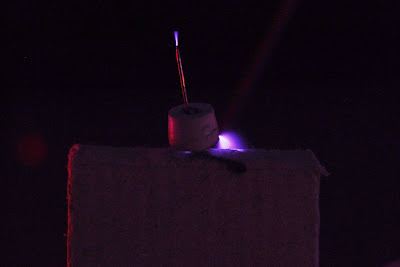 After a bit of testing the ozone smell is noticeable. The HV discharge causes oxigen to split into single atoms, and to recombine as ozone.

A slighly refurbished disk (essentially just the frame) can be seen spinning in this photo. The ring that is visible corresponds to the plasma from the ion spray at the tips of the frame: 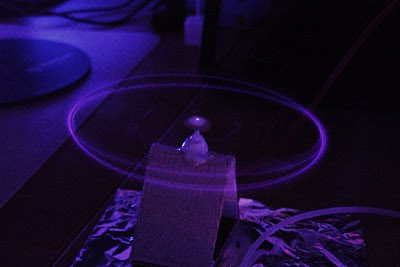 Another view of the pin that attaches to the center of the disk. The corona discharge is clearly visible: 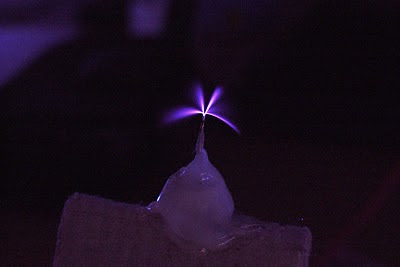