While the building phase can be an enjoyable experience, grabbing the sticks, putting the chopper on the ground, and gently increasing the thrust until that custom build apparatus starts to appear light on its stands is where the real fun begins. Would we ignore the noise of the struggling motors, and this styrofoam-shielded quadcopter would seem like a magical object for which gravity would be opening an exception everytime we wanted to. There is no magic, just technology, but still there is a sense of victory in tricking gravity in a brute force manner. Not in a magnificent scale as Howard Hughes H-4 Hercules, or lighter than air as Bartolomeu de Gusmão's flying bird, but still admirable for mimicking birds in the size and ability to fly (in a cumbersome way however), and for hovering like few of these animals can. 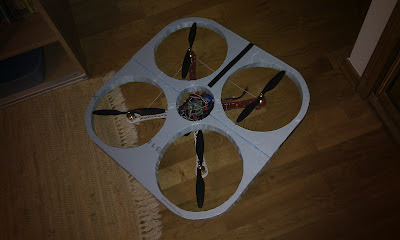 R/C airplane modelling exists for several decades, but with late improvements and reduced cost in microelectronics, energy storage, and RF communications, products in this domain have suffered a significant improvement in quality and innovation.